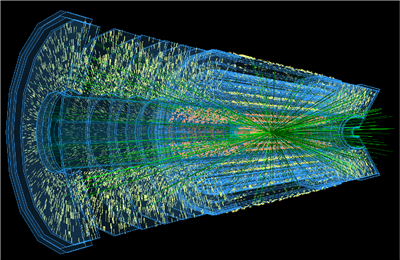 A data visualization from a simulation of the collision between two protons that will occur at the High-Luminosity Large Hadron Collider (HL-LHC). On average, up to 200 collisions will be visible in the collider's detectors at the same time. Shown here is a design for the Inner Tracker of the ATLAS detector, one of the hardware upgrades planned for the HL-LHC. Image courtesy of the ATLAS Experiment © 2018 CERN
Today, the National Science Foundation (NSF) announced its launch of the Institute for Research and Innovation in Software for High-Energy Physics (IRIS-HEP). The $25 million software-focused institute will tackle the unprecedented torrent of data that will come from the high-luminosity running of the Large Hadron Collider (LHC), the world’s most powerful particle accelerator located at CERN near Geneva, Switzerland. The High-Luminosity LHC (HL-LHC) will provide scientists with a unique window into the subatomic world to search for new phenomena and to study the properties of the Higgs boson in great detail. The 2012 discovery at the LHC of the Higgs boson—a particle central to our fundamental theory of nature—led to the Nobel Prize in physics a year later and has provided scientists with a new tool for further discovery.

The HL-LHC will begin operations around 2026, continuing into the 2030s. It will produce more than 1 billion particle collisions every second, from which only a tiny fraction will reveal new science, because the phenomena that physicists want to study have a very low probability per collision of occurring. The HL-LHC’s tenfold increase in luminosity—a measure of the number of particle collisions occurring in a given amount of time—will enable physicists to study familiar processes at an unprecedented level of detail and observe rare new phenomena present in nature.

But the increased luminosity also leads to more complex collision data. A tenfold increase in the required data processing and storage can not be achieved without new software tools for intelligent data filtering that record only the most interesting collision events, to enable scientists to analyze the data more efficiently.

Over the next five years, IRIS-HEP will focus on developing innovative software for use in particle physics research with the HL-LHC as the key science driver. It will also create opportunities for training and education in related areas of computational and data science and outreach to the general public. The institute will also work to increase participation from women and minorities who are underrepresented in high-energy physics research.

IRIS-HEP brings together multidisciplinary teams of researchers and educators from 17 universities, including Mark Neubauer, a professor of physics at the University of Illinois at Urbana-Champaign and a faculty affiliate with the National Center for Supercomputing Applications (NCSA) in Urbana. Neubauer is a member of the ATLAS Collaboration, which generates and analyzes data from particle collisions at the LHC. Neubauer will serve on the IRIS-HEP executive board and coordinate the institute’s activities to develop and evolve its strategic vision.

Neubauer, along with colleagues Peter Elmer (Princeton) and Michael Sokoloff (Cincinnati), led a community-wide effort to conceptualize the institute with funding from the NSF and was a key member of the group that developed the IRIS-HEP proposal. Through a process to conceptualize the institute involving 18 workshops over the last two years, key national and international partners from high-energy physics, computer science, industry, and data-science were brought together to generate more than eight community position papers, most notably a strategic plan for the institute and a roadmap for HEP software and computing R&D over the next decade. They reviewed two decades of approaches to LHC data processing and analysis and developed strategies to address the challenges and opportunities that lay ahead. IRIS-HEP emerged from that effort.

“IRIS-HEP will serve as a new intellectual hub of software development for the international high-energy physics community,” comments Neubauer. “The founding of this institute will do much more than fund software development to support the HL-LHC science; it will provide fertile ground for new ideas and innovation, empower early-career researchers interested in software and computing aspects of data-enabled science through mentoring and training to support their professional development, and will redefine the traditional boundaries of the high-energy physics community.”

Neubauer will receive NSF funding through IRIS-HEP to contribute to the institute’s efforts in software research and innovation. He plans to collaborate with Daniel S. Katz, NCSA’s assistant director for scientific software and applications, to put together a team to research new approaches and systems for data analysis and innovative algorithms that apply machine learning and other approaches to accelerate computation on modern computing architectures.

In related research also beginning in the current fall semester, Neubauer and Katz through a separate NSF award with Kyle Cranmer (NYU), Heiko Mueller (NYU) and Michael Hildreth (Notre Dame) will be collaborating on the Scalable Cyberinfrastructure for Artificial Intelligence and Likelihood-Free Inference (SCAILFIN) project. SCAILFIN aims to maximize the potential of artificial intelligence and machine learning to improve new physics searches at the LHC, while addressing current issues in software and data sustainability by making data analyses more reusable and reproducible.

Katz says he is looking forward to delving into these projects: “How to build tools that make more sense of the data, how to make the software more sustainable so there is less rewriting, how to write software that is portable across different systems and compatible with future hardware changes—these are tremendous challenges. And these questions really are timely. They fit into the greater dialogue that is ongoing in both the computer science and the information science communities. I’m excited for this opportunity to meld the most recent work from these complementary fields together with work in physics.”

Neubauer concludes, “The quest to understand the fundamental building blocks of nature and their interactions is one of the oldest and most ambitious of human scientific endeavors. The HL-LHC will represent a big step forward in this quest and is a top priority for the US particle physics community. As is common in frontier-science experiments pushing at the boundaries of knowledge, it comes with daunting challenges. The LHC experiments are making large investments to upgrade their detectors to be able to operate in the challenging HL-LHC environment.

“A significant investment in R&D for software used to acquire, manage, process, and analyze the huge volume of data that will be generated during the HL-LHC era will be critical to maximize the scientific return on investment in the accelerator and detectors. This is not a problem that could be solved by gains from hardware technology evolution or computing resources alone. The institute will support early-career scientists to develop innovative software over the next five to ten years, to get us where we need to be to do our science during the HL-LHC era. I am elated to see such a large investment by the NSF in this area for high-energy physics.”

IRIS-HEP is co-funded by NSF's Office of Advanced Cyberinfrastructure in the Directorate for Computer and Information Science and Engineering (CISE) and the NSF Division of Physics in the Directorate for Mathematical and Physical Sciences (MPS). IRIS-HEP is the latest NSF contribution to the 40-nation LHC effort. It is the third OAC software institute, following the Molecular Sciences Software Institute and the Science Gateways Community Institute.