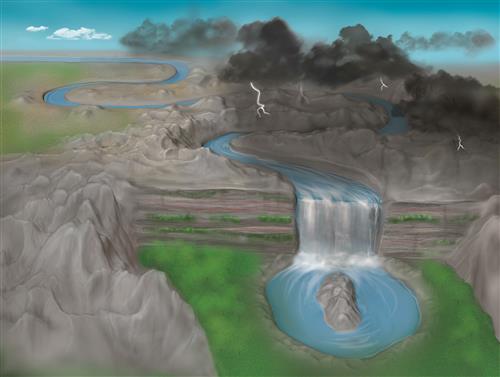 Artist's depiction of a disorder-induced transition to the topological Anderson insulator phase. A river flowing along a straight path is altered by disorder in the underlying landscape. After going through a transition (waterfall), the river forms a closed loop&emdasha shape having a different topology from that of the initially straight path. In the topological Anderson insulator phase, the trivial band structure of a normal material is transformed into a topologically nontrivial band structure from disorder and disruptions in the tunnel couplings between lattice sites. The winding number in the topological Anderson insulator phase is distinct from that of the normal case without disorder. Image by Lachina Creative, copyright Bryce Gadway, University of Illinois at Urbana-Champaign
Topological insulators (TIs) host exotic physics that could shed new light on the fundamental laws of nature. What’s more, the unusual properties of TIs hold tremendous promise for technological applications, including quantum computing, next-generation miniaturized data storage, and spintronics. Scientists around the globe are working to understand the microscopic properties of these materials that freely conduct electricity along their edges even though their bulk is an insulator.

Now a team of experimental physicists at the University of Illinois at Urbana-Champaign have made the first observation of a specific type of TI that’s induced by disorder. Professor Bryce Gadway and his graduate students Eric Meier and Alex An used atomic quantum simulation, an experimental technique employing finely tuned lasers and ultracold atoms about a billion times colder than room temperature, to mimic the physical properties of one-dimensional electronic wires having precisely tunable disorder. The system starts with trivial topology just outside the regime of a topological insulator; adding disorder nudges the system into the nontrivial topological phase.

This type of topological insulator induced by disorder is called the topological Anderson insulator, named after the noted theoretical physicist and Nobel laureate Philip Anderson, an alumnus of University Laboratory High School on the U of I campus. Surprisingly, while disorder typically inhibits transport and destroys nontrivial topology, in this system it helps to stabilize a topological phase.

The observation was made possible through close collaboration with an international team of theoretical physicists at the U of I, at the Institute of Photonic Sciences (ICFO), and at the Universitat Politècnica de Catalunya (UPC) in Spain, who elucidated the quantum physics at work and identified the key signature the experimentalists should look for in the system.

Theoretical physicist Pietro Massignan of UPC and ICFO comments, "Intuitively, one would think that disorder should play against conductance. For example, running is easy in an open field, but gets harder and harder as one moves through an increasingly denser forest. But here we show that suitably tailored disorder can actually trigger some peculiar conducting excitations, called topologically protected edge modes." 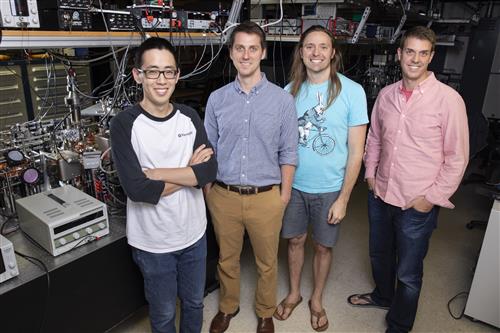 University of Illinois at Urbana Champaign Professors of Physics Bryce Gadway (far right) and Taylor Hughes (second from right) pose with graduate students Alex An (left) and Eric Meier, in Gadway's lab at the Loomis Laboratory of Physics. Photo by L. Brian Stauffer, University of Illinois at Urbana-Champaign
Meier is lead author on the paper. “Interestingly,” he adds, “in a 3D or 2D topological system, those edge states would be characterized by freely flowing electrons. But in a 1D system like ours, the edge states simply sit there, at either end of the wire. In any TI, the boundary states have the dimensionality of your system minus 1. In our 1D topological Anderson insulator, the boundary states are basically just points. While the boundary physics is actually a bit boring in this system, there is rich dynamics going on in the bulk of the system that is directly related to the same topology—this is what we studied.”

Gadway emphasizes, “Our taking on this research was really inspired by the 2014 prediction of Taylor Hughes and his graduate student Ian Mondragon-Shem at the U of I. Taylor was a key collaborator. Likewise, our colleagues in Spain made a tremendous contribution in introducing the concept of mean chiral displacement, which allows us to measure the topology directly in the bulk of the material.”

“Working with Taylor,” Gadway adds, “our Spanish colleagues found that the mean chiral displacement is essentially equivalent to the topological invariant of such a 1-D system, something called the winding number. This was critical to our being able to take the data on the system and relate what we saw in experiment to the system’s topology. This was one project where having a bevy of theorists around was a big help, both for performing the right measurements and for understanding what it all meant.”

“This is an exciting result in terms of potential applications,” Gadway affirms. “This suggests we may be able to find real materials that are almost topological that we could manipulate through doping to imbue them with these topological properties. This is where quantum simulation offers a tremendous advantage over real materials—it’s good for seeing physical effects that are very subtle. Our designer disorder is precisely controllable, where in real materials, disorder is as messy as it sounds—it’s uncontrollable.”

“Gadway’s experimental setup is a theorist’s dream,” Massignan adds. “It was like playing with LEGO: the model we envisaged could be built step-by-step, in a real laboratory. Every single element of the Hamiltonian we had in mind could be implemented in a very careful way, and changed in real time.”

ICFO postdoctoral researcher Alexandre Dauphin adds, “This platform is also very promising for studying the effects of both interaction and disorder in topological systems, which could lead to exciting new physics.”

NSF Program Director Alex Cronin oversees the funding program that supported this experimental effort. He points out the importance of this fundamental research that successfully employs engineered quantum systems to uncover new physics: “Before we get full-scale quantum computers to study a broad range of exotic systems, we already have quantum simulators like this one that are producing results right now. It is exciting to see new discoveries made with quantum simulators like this.”

These results were published online by the journal Science on Thursday, October 11, 2018. After submitting their work to the journal, the researchers of this study learned of the parallel observation of this same phenomenon by another research team at the University of Rostock, Germany.

“Their team used photonic waveguides to mimic the physical properties of this same kind of system, and they studied properties at the boundary of the system. We used cold atoms and observed bulk properties to get at a really clear visualization of the topology,” Gadway states. “These two works were complementary and together they illustrate how diverse physical systems can be controlled and made to exhibit the same kind of interesting phenomena.”

This research was supported by the National Science Foundation, and by the Office of Naval Research, and by the Spanish MINECO, the Generalitat de Catalunya, the EU, and the Fundació Privada Cellex. The conclusions presented are those of the researchers and not necessarily those of the funding agencies.