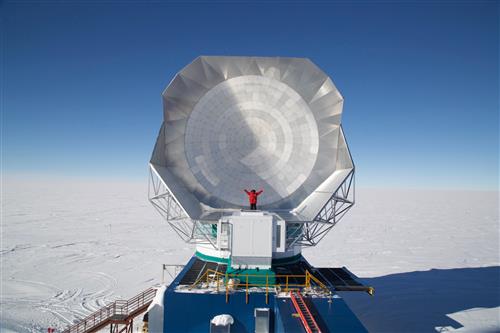 U of I astronomy graduate student Andrew Nadolski stands in front of the South Pole Telescope in Antarctica. Nadolski was stationed at the South Pole for the first year after installation of the third-generation camera on the telescope.
Deep in Antarctica, at the southernmost point on our planet, sits a 33-foot telescope designed for a single purpose: to make images of the oldest light in the universe.

This light, known as the cosmic microwave background, or CMB, has journeyed across the cosmos for 14 billion years—from the moments immediately after the big bang until now. Because it is brightest in the microwave part of the spectrum, the CMB is impossible to see with our eyes and requires specialized telescopes, cameras, optics, and detector technologies.

The South Pole Telescope, the largest telescope on the planet specially designed to measure the CMB, will use its third-generation camera (SPT-3G) to carry out a 5-year survey to observe the earliest instants of the universe. Since 2007, the SPT has shed light on the physics of black holes, discovered a galaxy cluster that is making stars at the highest rate ever seen, redefined our picture of when the first stars formed in the universe, provided new insights into dark energy, and homed in on the masses of neutrinos. This latest upgrade improves its sensitivity by nearly an order of magnitude—making it among the most sensitive CMB instruments ever built.

Gil Holder, a theoretical astrophysicist and professor at the University of Illinois at Urbana-Champaign, is a member of the SPT collaboration. He comments, “The SPT is able to take pictures of the very first instances in the history of the universe. By analyzing these images, we can measure what the universe is made of and understand the how the universe has evolved over cosmic time.”

The telescope is funded and maintained by the National Science Foundation in its role as manager of the U.S. Antarctic Program, the national program of research on the southernmost continent. Located at NSF’s Amundsen-Scott South Pole Station, the telescope is operated by a collaboration of more than 80 scientists and engineers from a group of universities and US Department of Energy national laboratories, including four institutions in Illinois. These research organizations—the University of Chicago, the University of Illinois at Urbana-Champaign, Argonne National Laboratory, and Fermi National Accelerator Laboratory—have worked together to build a new, ultra-sensitive camera for the telescope, containing 16,000 specially manufactured detectors.

U of I Professor Joaquin Vieira and his team built all of the cryogenic optics for the SPT-3G camera, which were a critical component of the project. Work entailed developing a new type of anti-reflection coating for the optics that could survive down to 0.3 degrees above absolute zero, a feat that required about four years of research and development.

'Baby pictures' of the cosmos 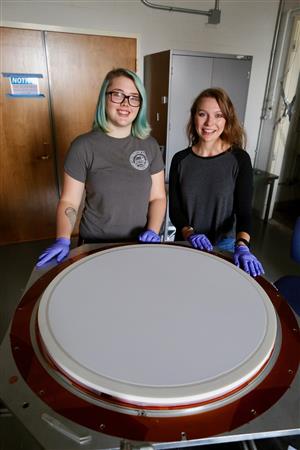 U of I physics undergraduate student Anna Koffman poses with REU student Sierra Barone from Wheaton College, in the Vieira lab, summer 2017. In the foreground is a large lens with a specially developed anti-reflection coating for the South Pole Telescope 3G Camera. Koffman is now a graduate student at the University of Pennsylvania.
The CMB is the oldest light in our universe, produced in the intensely hot aftermath of the big bang before even the formation of atoms. These primordial particles of light, which have remained almost untouched for nearly 14 billion years, provide unique clues about how the universe looked at the beginning of time and how it has changed since.

Vieira explains, “The cosmic microwave background, despite being the oldest light in the universe, is incredibly bright and outshines every other source in the Universe—but you have to build cameras that can see at millimeter wavelengths to observe it.”

However, because most of the energy is in the microwave part of the spectrum, to observe it we need to use special detectors at observatories in high and dry locations. The South Pole Station is better than anyplace else on Earth for this: it is located atop a two-mile thick ice sheet, and the extremely low temperatures in Antarctica mean there is almost no atmospheric water vapor.

The details of this “baby picture” of the cosmos will allow scientists to better understand the different kinds of matter and energy that make up our universe, such as neutrinos and dark energy. They may even find evidence of the gravitational waves from the beginning of the universe, regarded by many as the “smoking gun” for the theory of inflation.

This baby picture also serves as a rich astronomical survey; one of the things the researchers will be looking for are some of the first massive galaxies in the universe. These massive galaxies are increasingly of interest to astronomers as “star farms,” forming the first stars in the universe, and since they are nearly invisible to typical optical telescopes, the South Pole Telescope is perhaps the most efficient way to find them. 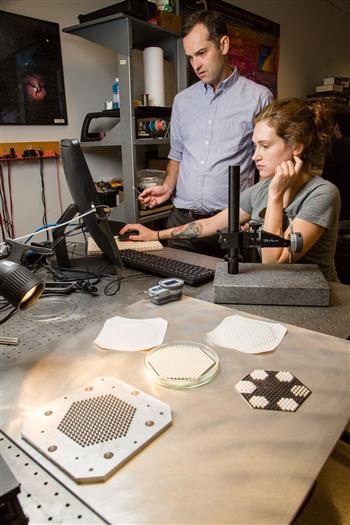 Professor of Astronomy and of Physics Joaquin Vieira works in his lab with then undergraduate student Angelina Hake-Hosemann (BS Physics 2016). In the foreground are cryogenic optics developed for the South Pole Telescope 3-G Camera. Photo by L. Brian Stauffer, University of Illinois at Urbana-Champaign
For the SPT-3G, scientists needed equipment far more sensitive than anything made commercially. They had to develop their own detectors, which use special materials for sensing tiny changes in temperature when they absorb light. These custom detectors were developed and manufactured from scratch in ultra-clean rooms at Argonne National Laboratory. The detectors went to Fermilab to be assembled into modules.

Astronomy graduate student Andrew Nadolski helped design and build the optics for SPT-3G and spent the first winter at the South Pole babysitting the new camera for its initial year of operation.

Nadolski comments, “A lot of research and development has to go into a big, state-of-the-art cosmology experiment like SPT-3G. I went from finding new ways of working with basic materials like ceramics and plastics to develop new cryogenic optics, to climbing around a giant telescope at the South Pole in –80°F and pitch darkness—all in the name of cosmology.”

“It's been a wild ride,” he adds, “but it's just getting started, because now we are getting the data and it's a whole new adventure."

After being tested at multiple collaborating universities around the country, the detectors made their way back to Fermilab to be integrated into the South Pole Telescope camera cryostat. The camera looks like an 8-foot-tall, 2,500-pound optical camera with a telephoto lens on the front, but with the added complication that the lenses must be cooled to just a few degrees above absolute zero. (Even Antarctica isn’t that cold, so this special cryostat is required to cool the lenses.)

Finally, the new camera was ready for its 10,000-mile journey to Antarctica by way of land, air and sea. On the final leg, from NSF’s McMurdo Station to the South Pole, it flew aboard a specialized LC130 cargo plane outfitted with skis so that it could land on snow near the telescope site, since the station sits atop an ice sheet. The components were carefully unloaded, and a team of more than 30 scientists raced to reassemble the camera during the brief three-month Antarctic summer—since the South Pole is not accessible by plane for most of the year because of temperatures that can drop to –100°F.

The South Pole Telescope’s multi-year observing campaign brings together researchers from across North America, Europe and Australia. With the upgraded telescope taking data, the exploration of the cosmic microwave background radiation enters a new era with a powerful collaboration and an extremely sensitive instrument.

Anna Kofman, now a graduate student in physics at University of Pennsylvania, took a year off after receiving her undergraduate degree from the U of I so that she could lead the fabrication of the anti-reflection coatings for the large lenses, which were critical to the overall sensitivity of the new camera.

Kofman acknowledges, "It was an amazing experience to be able to build something that gets sent to the end of the Earth to observe the beginning of the universe. I am so fortunate to have had that opportunity at Illinois."

The South Pole Telescope is funded primarily by the National Science Foundation’s Office of Polar Programs and the U.S. Department of Energy Office of Science. Partial support also is provided by the NSF-funded Physics Frontier Center at the KICP, the Kavli Foundation, and the Gordon and Betty Moore Foundation. The conclusions presented are those of the researchers and not necessarily those of the funding agencies.