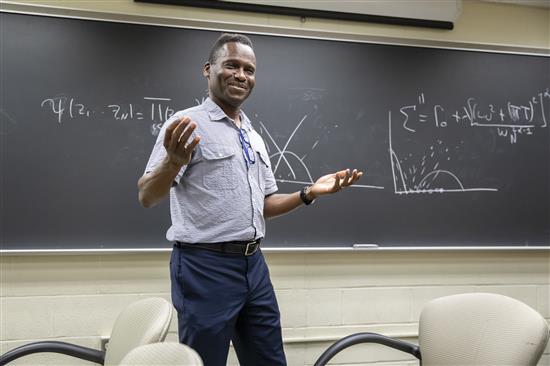 Illinois Physics Professor Philip Phillips presenting to his group at the Institute for Condensed Matter Physics in Urbana. Photo by L. Brian Stauffer, University of Illinois at Urbana-Champaign
Illinois Physics Professor Philip Phillips and Math Professor Gabriele La Nave have theorized a new kind of electromagnetism far beyond anything conceivable in classical electromagnetism today, a conjecture that would upend our current understanding of the physical world, from the propagation of light to the quantization of charge. Their revolutionary new theory, which Phillips has dubbed “fractional electromagnetism,” would also solve an intriguing problem that has baffled physicists for decades, elucidating emergent behavior in the “strange metal” of the cuprate superconductors.

This research is published in an upcoming colloquium paper in Reviews of Modern Physics (arXiv:1904.01023v1).

The Phillips–La Nave theory builds on the well-known work of physicists Michael Faraday and Emmy Noether.

“Michael Faraday’s 1832 experiments proved unequivocally that electricity and magnetism are in fact two sides of the same coin—hence, any theory that treats them as separate is redundant. This redundancy is known as a gauge symmetry,” explains Phillips. “Emmy Noether, a prominent mathematician of the early 20th century, noticed a pattern in such redundancies. Her first theorem states that such redundancies imply that something is being conserved. Noether’s first theorem, underlies much of modern theoretical physics.

“However, Noether’s second theorem, considerably less well known, points to a potential problem with the first theorem. What she noticed is that the redundancies cannot be uniquely specified, and hence the form of the conserved quantity is inherently ambiguous.

“However, in showing how the redundancies cannot be uniquely formulated, Noether only considered ordinary derivatives,” notes Phillips. “No new information arises in this approach, and this is why the second theorem has been overlooked for a century. But the second theorem also allows redundancies formulated in terms of fractional derivatives. By such calculations, many nontrivial consequences arise for the conserved current and the basic equations of electromagnetism.”

A key consequence of Phillips and La Nave’s fractional electro-magnetism is that the dimensionality of the current isn’t just determined by the dimensionality of spacetime—it can acquire any value. Likewise, the charge is no longer quantized as in the standard Maxwell theory, turning classic physics on its head.

“One major consequence of fractional magnetism is that the current is free to take any value, which has a logical, yet surprising effect on charge,” Phillips asserts. “Because it can take any value, it’s no longer quantized. By exploiting this loophole, we have devised an entire class of new electromagnetisms, which also contains the standard Maxwell case.”

Phillips and La Nave’s new mathematical formulation of electromagnetism would solve the baffling strange metal problem of the cuprate superconductors. Strange metals exhibit emergent behaviors that deviate from the standard theory of metals and have defied explanation for the past 30 years.

“Mathematically, a key component of the proof relies on extra dimensions,” Phillips explains, “and it is here that the mathematical insight of Professor Gabriele La Nave was crucial. Physicist Juan Maldacena showed that extra dimensions are useful in thinking about the relationship between gravity and quantum field theory. By exploiting this construct, we demonstrated that certain interactions in higher dimensional gravity theories reduce to fractional electromagnetism in a spacetime with one lower dimension.

“The implication here is that materials exhibiting non-standard redundancies in electromagnetism have hidden dimensions.”

Illinois Physics graduate student Kridsanaphong Limtragool contributed to the theoretical work pointing to charge no longer being quantized in this extra-dimensional formulation of fractional electromagnetism. According to Phillips, a smoking-gun proof of this higher dimensionality is the breakdown of charge quantization. Phillips says experiments designed to test this in the strange metal phase of cuprate superconductors could offer the first validation of extra dimensions in matter.

This work is funded by the National Science Foundation and the Center for Emergent Superconductivity, a Department of Energy Frontier Research Center. The conclusions presented are those of the researchers and not necessarily those of the funding agencies.