Illinois researchers among winners of 2020 Breakthrough Prize in Fundamental Physics First Image of a Black Hole. The shadow of a black hole seen here is the closest we can come to an image of the black hole itself, a completely dark object from which light cannot escape. The black hole's boundary — the event horizon from which the EHT takes its name — is around 2.5 times smaller than the shadow it casts and measures just under 40 billion km across. While this may sound large, this ring is only about 40 microarcseconds across — equivalent to measuring the length of a credit card on the surface of the Moon. CREDIT: EHT Collaboration
The 347 scientists from around the globe who worked together to capture the first-ever image of a black hole have won the 2020 Breakthrough Prize in Fundamental Physics. The Breakthrough Prize Foundation announced today that members of the international Event Horizon Telescope (EHT) Collaboration were selected for this honor, with the citation: “For the first image of a supermassive black hole, taken by means of an Earth-sized alliance of telescopes.”

The $3-million prize will be shared equally among all contributing scientists named on the six EHT papers published on April 10, 2019, in conjunction with the public unveiling of the black hole image—the first direct evidence of a supermassive black hole and its shadow. 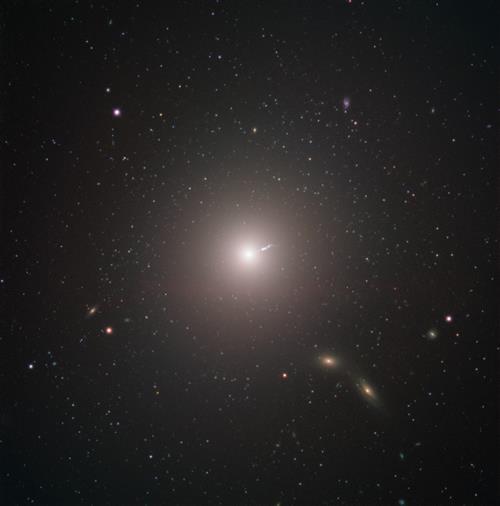 Messier 87 (M87) is an enormous elliptical galaxy located about 55 million light years from Earth, visible in the constellation Virgo. It has double the mass of the Milky Way. The EHT chose the object as the target of its observations for two reasons. While the EHT's resolution is incredible, even it has its limits. As more massive black holes are also larger in diameter, M87's central black hole presented an unusually large target — meaning that it could be imaged more easily than smaller black holes closer by. The other reason for choosing it, however, was decidedly more Earthly. M87 appears fairly close to the celestial equator when viewed from our planet, making it visible in most of the Northern and Southern Hemispheres. This maximized the number of telescopes in the EHT that could observe it, increasing the resolution of the final image. Credit: ESO
The image was generated from data taken in April 2017 by aiming eight highly sensitive ground-based radio telescopes at the supermassive black hole at the center of Messier 87, a giant elliptical galaxy in the constellation Virgo. The telescopes simultaneously tracked M87’s black hole from their respective positions in Antarctica, Chile, Mexico, Hawaii, Arizona, and Spain. Synchronized using atomic clocks, this network of radio telescopes formed a virtual telescope the size of the Earth.

Physics and Astronomy Professor Charles Gammie of the University of Illinois at Urbana-Champaign led the EHT theoretical working group responsible for generating an extensive library of 3-dimensional time-dependent numerical models to elucidate the 5 petabytes of data collected by the network of EHT telescopes.

"This is such an honor, and we're very grateful to the Breakthrough Prize Foundation for this recognition,” Gammie comments. “This is an exciting time to be working in black hole astrophysics!" 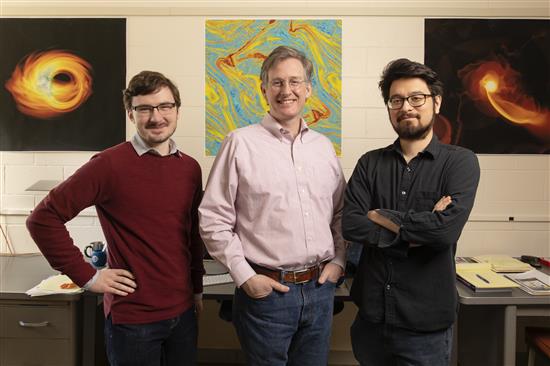 Illinois Professor of Physics and Astronomy Charles Gammie poses in his office with physics graduate students Ben Prather (left) and George Wong (right) at Loomis Laboratory of Physics in Urbana. Gammie co-led the theory working group for the Event Horizon Telescope collaboration. Credit: L. Brian Stauffer, University of Illinois at Urbana-Champaign
Gammie’s research team at the U of I has a long history of contributions to the theoretical understanding of black holes, including creating the first supercomputer simulation of matter falling into a black hole and the first supercomputer simulations that consistently include Einstein’s theory of general relativity. This expertise in theoretical black hole physics enabled the U of I team to produce a good portion of the theoretical models ultimately assembled for the EHT. The team also developed sophisticated computer code to make running and analyzing the simulations as efficient as possible.

The research performed by Gammie’s team at the U of I allowed the EHT Collaboration to constrain the spin of M87’s black hole, which is related to the asymmetry of the ring in the EHT image.

The U of I team’s work also shed light on the physical processes underlying the large radio jets emanating from the black hole. By comparing the image with their simulations, Gammie’s team established that the luminous, fast-moving jets of gas coming from near the center of M87 are powered by the black hole itself, by magnetic fields that thread through the hole and brake its rotation, transforming the rotational energy of the hole into outgoing beams of electromagnetic energy.

"The Breakthrough Prize is wonderful recognition for years of hard work by my collaborators, my students and postdocs, and me,” notes Gammie. “The EHT is a large, international collaboration that was able to work together and produce a major leap in our understanding of black holes. Hopefully this is just the first step on the road to better and more complete data in the future.

“We are now turning our attention to future observing campaigns that will be able to measure the spin of M87 and of the black hole in the Milky Way's galactic center. We also hope to be able to demonstrate experimentally the tapping of black hole spin energy by magnetic fields linked to the surrounding hot gas."

Prather comments, “It's been inspiring and incredibly instructive to be a part of such an important international project, with so many dedicated and talented scientists. EHT has been at the center of my education and work here at Illinois, and I can't think of a better way to learn than to work closely with the best scientists in the field. I'm consistently inspired by their work and ideas, and I think this prize speaks to how important those ideas are. I'm humbled by all the recognition our results have received, and enthusiastic about all of the support and public attention for this project.”

Wong adds, “I feel very lucky to have had this chance during my graduate career at Illinois—it is incredibly stimulating to collaborate with so many leading scientists all over the world on a project that has captured the world's attention. The entire experience has been a formative part of my education. Not only has it fostered the development of my skills as a scientist, but it has also opened the doors to so many opportunities to work with other collaboration members on supplemental projects.”

Nadolski notes, “I am fortunate to have had the opportunity to make a small contribution to this enormous undertaking. Countless people from all over the world worked for years to bring the project to fruition. That level of dedicated international cooperation for the purpose of advancing human knowledge is an achievement in itself. I hope this experiment will serve as a lasting example of what humanity can accomplish if we work together across borders, ideologies, and institutions and that we are inspired to apply the same spirit of cooperation and dedication to other vital scientific endeavors, like combating climate change, as we have to cosmic ones.”

Now in its eighth year, the Breakthrough Prize, known as the “Oscars of Science,” annually recognizes achievements in the life sciences, fundamental physics, and mathematics. The Breakthrough Prize Foundation also announced recipients of the New Horizons Prize in physics and mathematics. Collectively, these awards total $21.6 million. The full press release is published here.

The new laureates will be recognized at the eighth annual Breakthrough Prize gala awards ceremony on Sunday, November 3, at NASA Ames Research Center in Mountain View, California, and broadcast live on National Geographic. EHT Director Shep Doeleman of the Harvard-Smithsoinian Center for Astrophysics will accept on behalf of the collaboration. Each year, the program has a theme, and this year’s topic – “Seeing the Invisible” – is inspired by the Event Horizon Telescope collaboration, which created the first image of a black hole, as well as the broader power of science and mathematics to reveal hidden, uncharted worlds. 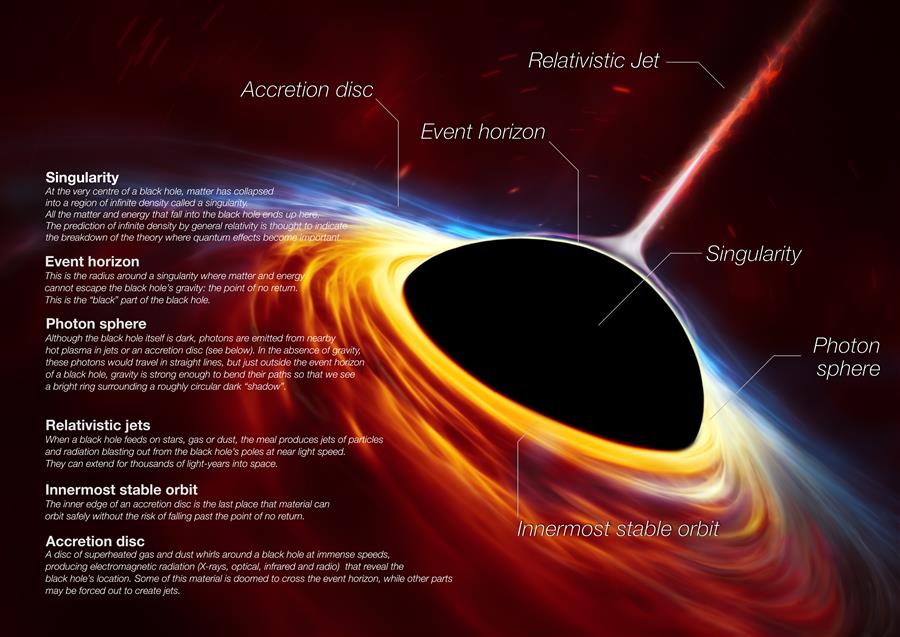 Anatomy of a Black Hole. This artist's impression depicts a rapidly spinning supermassive black hole surrounded by an accretion disc. This thin disc of rotating material consists of the leftovers of a Sun-like star which was ripped apart by the tidal forces of the black hole. The black hole is labelled, showing the anatomy of this fascinating object. Credit: ESO
If you have questions about the Department of Physics or ideas for other stories, contact Siv Schwink, 217.300.2201