Philip Phillips elected to American Academy of Arts and Sciences 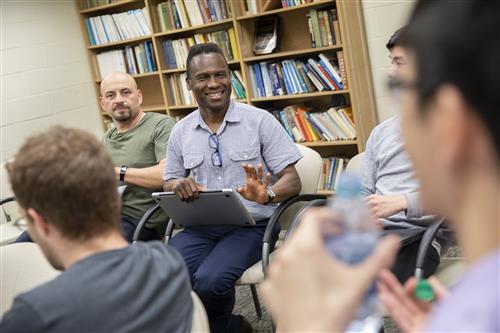 The 2020 class comprises 276 new members, including artists, scholars, scientists and leaders in the public, nonprofit and private sectors. U. of I. Computer Science Professor Sarita V. Adve was also elected this year.

Phillips is part of the theoretical condensed matter group in physics at the U. of I.'s Institute for Condensed Matter Theory (ICMT). He has developed various models of how electrons travel through superconductors containing copper and iron and how electrons interact at temperatures near absolute zero.

He is recognized for his work with the random dimer model, a 1D model that conducts electricity and shows that strong electron interactions lead to a breakdown on the particle concept in high-temperature superconductors.

He is recognized for his work on the random dimer model, a 1D model that conducts electricity in the presence of disorder, violating the localization theorem of Anderson’s and for developing the concept of Mottness, which explains the breakdown of the particle concept in strongly interacting systems such as the copper-oxide high-temperature superconducting materials.

Phillips earned a Ph.D. from the University of Washington in 1982. He worked at the Massachusetts Institute of Technology before joining the faculty at Illinois Physics in 1993. He is a fellow of the Guggenheim Memorial Foundation, the American Association for the Advancement of Science and the American Physical Society.

The American Academy of Arts and Sciences was founded in 1780 by John Adams, John Hancock and others who believed the new republic should honor exceptionally accomplished individuals and engage them in advancing the public good.

“The members of the class of 2020 have excelled in laboratories and lecture halls, they have amazed on concert stages and in surgical suites, and they have led in boardrooms and courtrooms,” notes academy President David W. Oxtoby. “With today’s election announcement, these new members are united by a place in history and by an opportunity to shape the future through the academy’s work to advance the public good.”