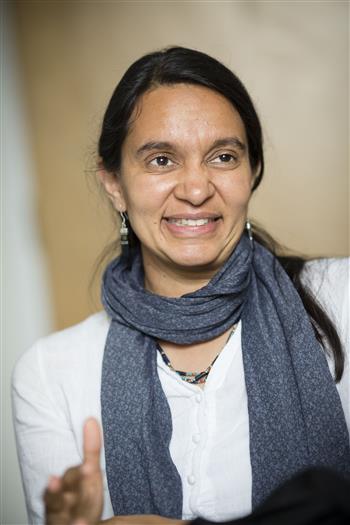 Vishveshwara comments, “I am honored to be entrusted with this role and to serve my condensed matter physics colleagues across the U.S. and beyond. I will strive to ensure that our core values, as well as our interconnects with other sub-fields, are fostered and highlighted.  At the recent APS Annual Leadership Meeting, it was recognized that we as scientists have a responsibility to widely communicate our science; I will engage with our community to convey the beauty, richness, and value of our research in ways that will resonate with the public, with government officials, and with other scientists.”

Vishveshwara has developed a strong arts-and-physics outreach program, developing a project-based interdisciplinary course for undergraduate students and several highly successful performing arts and multimedia pieces that explore the quantum world. Most recently, she collaboratively brought together an arts-and-science festival for the public.

Vishveshwara is the recipient of several honors. She is an APS Fellow and was the Margaret Burbidge Visiting Professor at University of California, San Diego, from 2019 to 2020. She was a Simons Fellow in Theoretical Physics from 2012 to 2013, a National Science Foundation American Competitiveness and Innovation Fellow in 2010, and received an NSF Career Award from 2007 to 2012.

Vishveshwara received her bachelor’s degree in physics from Cornell University in 1996, graduating magna cum laude; advised by Illinois alumnus Professor Matthew Fisher, she received her doctoral degree in theoretical physics from the University of California, Santa Barbara. She held postdoctoral positions at Illinois Physics from 2002 to 2005, affiliated with Professors Paul Goldbart and Tony Leggett. She then joined the faculty at Illinois Physics in 2005. At Illinois, Vishveshwara is a member of the Institute for Condensed Matter Theory (ICMT), the Illinois Quantum Information and Science Center (IQUIST), and the Illinois Center for Advanced Studies of the Universe (ICASU). She holds additional appointments at the Beckman Institute for Advanced Science and Technology and at the Illinois Materials Research Laboratory (MRL).