Miles V. Klein received his bachelor's degree in physics from Northwestern University, Evanston, in 1954, and his Ph.D. in physics from Cornell University in 1961. He joined the Department of Physics at the University of Illinois as an assistant professor in 1962. Professor Klein has made seminal contributions to our understanding of optical effects in solids, and his masterful coupling of theory with experiment has led to major discoveries in condensed matter physics and considerable progress in unraveling superconductivity. A Fellow of the American Physical Society and a member of both the American Academy of Arts and Sciences and the National Academy of Sciences, Professor Klein has pioneered thermal, optical (infrared), and Raman scattering techniques to probe the fundamental electronic properties of solid-state materials.

In his research, Professor Klein studies electronic, vibrational, and magnetic excitations in solids and their mutual couplings. He uses a form of spectroscopy called Raman scattering , which is essentially inelastic scattering of visible laser light, to study vibrational, electronic, and magnetic excitations in insulators, semiconductors and metals. The frequency shift suffered by the light in the scattering process is equal to the frequency of the excitation created in the sample. This allows the experimentalist to study the spectra of the created excitations under conditions of varying temperature, sample composition, applied magnetic field, etc. Professor Klein shared in the discovery of Raman scattering by electronic excitations across the superconducting gap in low temperature superconductors and helped develop the theory of this effect. 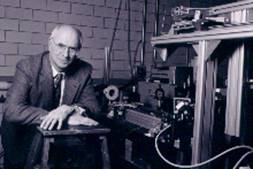 With his students, he found that the Raman response of the cuprate high-temperature superconductors mimics that from conventional superconductors, but there are also substantial differences. These owe their origin to the strong electronic and magnetic correlations in these materials and from the unconventional (d -wave) nature of the superconducting order parameter. Recently Professor Klein has begun Raman studies of the nickel borocarbide family of superconductors. These are believed to be more conventional than the cuprates. The superconducting gap excitations partially support this presumption. There have been several surprises, however, including an unexpected dependence of the value of the gap on the boron isotope.