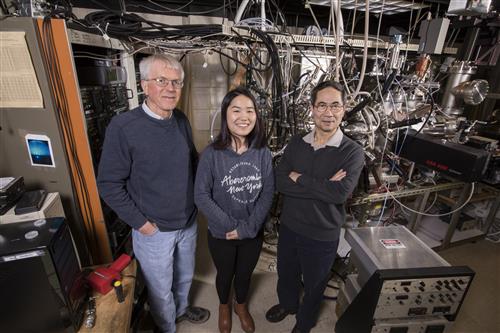 (L-R) Professor of Physics James Eckstein, his graduate student Yang Bai, and Professor of Physics Tai-Chang Chiang pose in front of the atomic layer by layer molecular beam epitaxy system used to grow the topological insulator thin-film samples for this study, in the Eckstein laboratory at the University of Illinois. Photo by L. Brian Stauffer, University of Illinois at Urbana-Champaign
A groundbreaking sample preparation technique has enabled researchers at the University of Illinois at Urbana-Champaign and the University of Tokyo to perform the most controlled and sensitive study to date of a topological insulator (TI) closely coupled to a superconductor (SC). The scientists observed the superconducting proximity effect—induced superconductivity in the TI due to its proximity to the SC—and measured its relationship to temperature and the thickness of the TI.

TIs with induced superconductivity are of paramount interest to physicists because they have the potential to host exotic physical phenomena, including the elusive Majorana fermion—an elementary particle theorized to be its own antiparticle—and to exhibit supersymmetry—a phenomenon reaching beyond the standard model that would shed light on many outstanding problems in physics. Superconducting TIs also hold tremendous promise for technological applications, including topological quantum computation and spintronics.

Naturally occurring topological superconductors are rare, and those that have been investigated have exhibited extremely small superconducting gaps and very low transition temperatures, limiting their usefulness for uncovering the interesting physical properties and behaviors that have been theorized.

TIs have been used in engineering superconducting topological superconductors (TI/SC), by growing TIs on a superconducting substrate. Since their experimental discovery in 2007, TIs have intrigued condensed matter physicists, and a flurry of theoretical and experimental research taking place around the globe has explored the quantum-mechanical properties of this extraordinary class of materials. These 2D and 3D materials are insulating in their bulk, but conduct electricity on their edges or outer surfaces via special surface electronic states which are topologically protected, meaning they can’t be easily destroyed by impurities or imperfections in the material.

But engineering such TI/SC systems via growing TI thin films on superconducting substrates has also proven challenging, given several obstacles, including lattice structure mismatch, chemical reactions and structural defects at the interface, and other as-yet poorly understood factors. 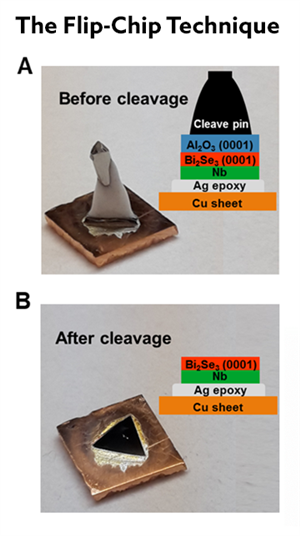 The 'flip-chip' cleavage-based sample preparation: (A) A photo and a schematic diagram of assembled Bi2Se3(0001)/Nb sample structure before cleavage. (B) Same sample structure after cleavage exposing a 'fresh' surface of the Bi2Se3 film with a pre-determined thickness. Image courtesy of James Eckstein and Tai-Chang Chiang, U. of I. Department of Physics and Frederick Seitz Materials Research Laboratory
Now, a novel sample-growing technique developed at the U. of I. has overcome these obstacles. Developed by physics professor James Eckstein in collaboration with physics professor Tai-Chang Chiang, the new “flip-chip” TI/SC sample-growing technique allowed the scientists to produce layered thin-films of the well-studied TI bismuth selenide on top of the prototypical SC niobium—despite their incompatible crystalline lattice structures and the highly reactive nature of niobium.

These two materials taken together are ideal for probing fundamental aspects of the TI/SC physics, according to Chiang: “This is arguably the simplest example of a TI/SC in terms of the electronic and chemical structures. And the SC we used has the highest transition temperature among all elements in the periodic table, which makes the physics more accessible. This is really ideal; it provides a simpler, more accessible basis for exploring the basics of topological superconductivity,” Chiang comments.

The method allows for very precise control over sample thickness, and the scientists looked at a range of 3 to 10 TI layers, with 5 atomic layers per TI layer. The team’s measurements showed that the proximity effect induces superconductivity into both the bulk states and the topological surface states of the TI films. Chiang stresses, what they saw gives new insights into superconducting pairing of the spin-polarized topological surface states.

“The results of this research are unambiguous. We see the signal clearly,” Chiang sums up. “We investigated the superconducting gap as a function of TI film thickness and also as a function of temperature. The results are pretty simple: the gap disappears as you go above niobium’s transition temperature. That’s good—it’s simple. It shows the physics works. More interesting is the dependence on the thickness of the film. Not surprisingly, we see the superconducting gap reduces for increasing TI film thickness, but the reduction is surprisingly slow. This observation raises an intriguing question regarding how the pairing at the film surface is induced by coupling at the interface.”

Chiang credits Eckstein with developing the ingenious sample preparation method. It involves assembling the sample in reverse order, on top of a sacrificial substrate of aluminum oxide, commonly known as the mineral sapphire. The scientists are able to control the specific number of layers of TI crystals grown, each of quintuple atomic thickness. Then a polycrystalline superconducting layer of niobium is sputter-deposited on top of the TI film. The sample is then flipped over and the sacrificial layer that had served as the substrate is dislodged by striking a “cleavage pin.” The layers are cleaved precisely at the interface of the TI and aluminum oxide. 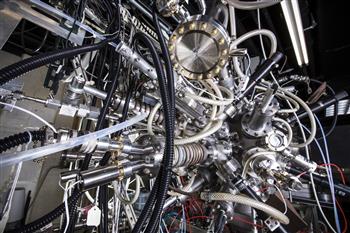 A close-up shot of the atomic layer by layer molecular beam epitaxy system used to grow the topological insulator thin-film samples for this study, located in the Eckstein laboratory at the University of Illinois. Photo by L. Brian Stauffer, University of Illinois at Urbana-Champaign
Eckstein explains, “The ‘flip-chip’ technique works because the layers aren’t strongly bonded—they are like a stack of paper, where there is strength in the stack, but you can pull apart the layers easily. Here, we have a triangular lattice of atoms, which comes in packages of five—these layers are strongly bonded. The next five layers sit on top, but are weakly bonded to the first five. It turns out, the weakest link is right at the substrate-TI interface. When cleaved, this method gives a pure surface, with no contamination from air exposure.”

The cleavage was performed in an ultrahigh vacuum, within a highly sensitive instrument at the Institute for Solid State Physics at the University of Tokyo capable of angle-resolved photoemission spectroscopy (ARPES) at a range of temperatures.

Chiang acknowledges, “The superconducting features occur at very small energy scales—it requires a very high energy resolution and very low temperatures. This portion of the experiment was completed by our colleagues in the University of Tokyo, where they have the instruments with the sensitivity to get the resolution we need for this kind of study. We couldn’t have done this without this international collaboration.”

“This new sample preparation method opens up many new avenues in research, in terms of exotic physics, and, in the long term, in terms of possible useful applications—potentially even including building a better superconductor. It will allow preparation of samples using a wide range of other TIs and SCs. It could also be useful in miniaturization of electronic devices, and in spintronic computing, which would require less energy in terms of heat dissipation,” Chiang concludes.

Eckstein adds, “There is a lot of excitement about this. If we can make a superconducting TI, theoretical predictions tell us that we could find a new elementary excitation that would make an ideal topological quantum bit, or qubit. We’re not there yet, and there are still many things to worry about. But it would be a qubit whose quantum mechanical wave function would be less susceptible to local perturbations that might cause dephasing, messing up calculations.”

These findings were published online on 27 April 2018 in the journal Science Advances.

This research was funded by the U.S. Department of Energy, the National Science Foundation, the Deutsche Forschungsgemeinschaft, and by Japan’s Ministry of Education, Culture, Sports, Science and Technology. The conclusions presented are those of the researchers and not necessarily those of the funding agencies.