Each year, the American Physical Society’s March Meeting hosts the largest assembly of physicists in the nation, with over 11,000 attendees. In conjunction with the 2019 meeting, March 4–8 at the Boston Convention and Exhibition Center, the Department of Physics at the University of Illinois at Urbana-Champaign is bringing two of its educational and entertaining outreach programs, Quantum Voyages and LabEscape. 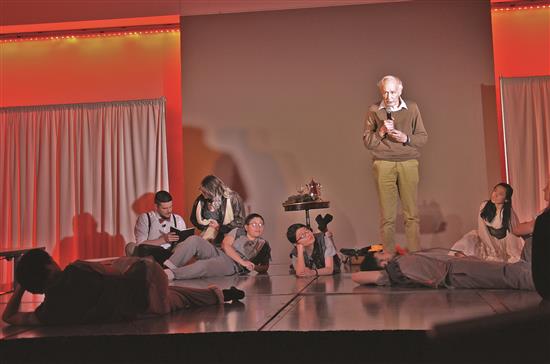 Nobel Laureate Anthony Leggett is a Quantum Sage in the premiere performance of Quantum Voyages on March 30, 2018, at the I Hotel and Conference Center. In Boston, Leggett's role will be played by former Boston University Provost David Campbell, who is a former Head of Department and Emeritus Professor at Illinois Physics. Campbell has written his own monologue for the Boston performance.
Quantum Voyages is one of two special physics-and-the-arts productions being staged back-to-back in one evening on Wednesday, March 6, 8–10 p.m. in the Westin Boston Waterfront hotel’s Commonwealth Room. The show is open to the public and free of charge. Seating is first come, first served. Quantum Voyages is a contemporary performance piece exploring the extraordinary phenomena of the quantum world through an epic journey.

Two voyagers—Terra (earth) and Akash (sky)—enter into the microscopic world of atomic landscapes and quantum conundrums, guided by the spirit of knowledge, Sapienza. Along their journey, the voyagers experience the seemingly paradoxical behaviors of matter at the smallest scale. Several Quantum Sages, played by real-life physicists appearing as themselves, cross the voyagers’ path and explain the quantum phenomena in sometimes humorous, sometimes poignant monologues.

This interdisciplinary work was created at the University of Illinois at Urbana-Champaign by Physics Professor Smitha Vishveshwara and Professor of Theater Latrelle Bright, in collaboration with physics and performing arts students.

The Quantum Sage cameo appearances will include U of I Physics Professors Dale Van Harlingen (also a former head of department), Nadya Mason, and Smitha Vishveshwara; former Boston University Provost David Campbell, who is also emeritus faculty and former head of the U of I Department of Physics; and Harvard graduate student Teng Yangting. Principal performers are educator and actor Kalan Benbow (Sapienza) and U of I physics graduate students Michael Highman (Akash) and Gloria Lee (Terra). U of I theater student Maddie Martin is the production manager.

Vishveshwara notes, “Our Sunday afternoon rehearsals are magical and wonderfully educational. It’s a joy watching our script come to life. We have a mix of theater and physics people in the production, and we emphasize the cast having an understanding of the physics we are conveying, in addition to getting top-notch theater training from Latrelle. It’s a harmonious blend of two worlds, theater and science.”

This is the third performance of Quantum Voyages. It premiered on March 30, 2018, at the I Hotel and Conference Center, in honor of Nobel Prize-winning physicist Anthony Leggett’s 80th birthday; Leggett played one of the Quantum Sages. A second performance on April 4, 2018, at the Beckman Institute for Advanced Science was dedicated to the memory of Professor Charles Slichter, a revered condensed matter physicist who served on the Illinois Physics faculty for 57 years. Two of the Quantum Sage monologues written for those performances by U of I Physics Professors Brian DeMarco and Virginia Lorenz will be included in the Boston performance; they will be recited by Vishveshwara and Yangting, respectively.

Vishveshwara, in addition to being a condensed matter theorist at the Department of Physics, is a member of the U of I Beckman Institute’s Social and Emotional Dimensions of Well-Being group, where her work focuses on the intersection of the arts and sciences. She is currently working on a multi-media drama entitled Quantum Rhapsodies in collaboration with the Jupiter String Quartet, the Beckman Visualization Lab and collaborators, and students in her class Phys498-ART Where the Arts meets Physics, to be performed at the U of I Beckman Institute’s 30th anniversary celebration on April 10, 2019. 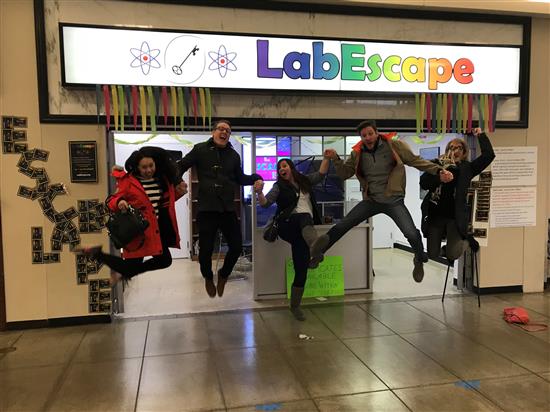 LabEscape participants jump for joy after successfully completing their mission at Lincoln Square Mall in Urbana.
LabEscape, an escape room created by Physics Professor Paul Kwiat and colleagues and run by U of I physics students, is also taking to the road for the APS March Meeting, offering four days of full-length one-hour adventures at the Boston Convention and Exhibition Center.

In the modified storyline, world-renowned quantum physicist Professor Alberta Pauline Schrödenberg (played by real-life physicist Nadya Mason) is stuck on an airplane and desperately needs help — the fate and security of the entire world (and more importantly, her funding!) hang in the balance. Participants are special agents who must search her lab, solve mind-blowing puzzles to reveal clues, and hopefully complete the mission.

This APS- and NSF-funded outreach project is the world’s only science-based escape-room in which all the puzzles involve various physics phenomena, showing that science can be useful and accessible, as well as beautiful and fun. According to Kwiat, the original two LabEscape adventures will continue to run at the Lincoln Square Mall in Urbana through the end of 2019. Kwiat is looking for good candidates for LabEscape’s next venue.

Adventures are by appointment. Kwiat invited local Boston high schoolers and APS attendees to partake, and just about every one of the 434 available slots have already been booked. A website with more information is at https://labescape.org/aps/.