The David Pines Symposium on Superconductivity Today and Tomorrow 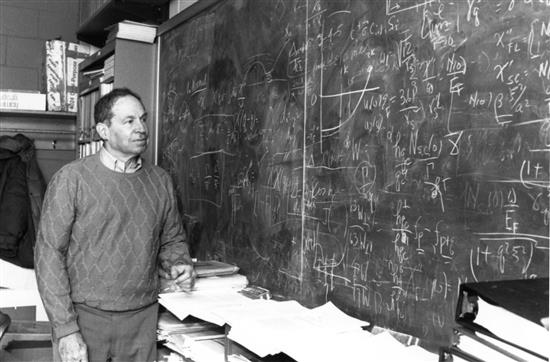 David Pines at a blackboard. Image scanned at the AIP Emilio Sègre Visual Archives.
A symposium honoring the late Center for Advanced Study Professor Emeritus of Physics and of Electrical and Computer Engineering David Pines is taking place on March 29 and 30 at the Institute for Condensed Matter Theory (ICMT) of the University of Illinois at Urbana-Champaign. At the David Pines Symposium on Superconductivity Today and Tomorrow, 20 invited speakers will cover today’s most pressing problems and most promising directions in superconductivity. Some of the talks will also address other research topics that were of special interest to Pines, including Fermi liquids and topics in nuclear physics and astrophysics.

The symposium is being organized by Professor Andrey Chubukov (University of Minnesota), Professor Jörg Schmalian (Karlsruhe Institute of Technology), and by current Director of the ICMT and Professor Eduardo Fradkin. Both Chubukov and Schmalian were postdocs in Urbana in the 1990s working closely with David Pines.

Pines, one of the foremost condensed matter theorists of his generation, died on May 3, 2018, in Urbana, Illinois, at the age of 93. He was a student of Joseph Weinberg, Robert Oppenheimer, David Bohm, and John Bardeen. Pines is remembered for his many ground-breaking accomplishments in condensed matter physics.

With Bohm, Pines established the collective nature of electron-electron interactions in solids by formulating the random phase approximation (RPA), the basis of the current understanding of screening in metals.

With Bardeen, Pines showed that in a dense fermionic system the electron-phonon attractive interaction can overcome the Coulomb repulsion between electrons. This discovery led directly to the discovery of the mechanism that underlies the Bardeen Cooper Schrieffer theory of superconductivity. Pines had a life-long interest in superconductivity, making seminal contributions to our understanding of heavy fermions and of the high temperature superconductors.

Pines is also noted for porting new approaches across disciplines to elucidate complex systems and emergent behavior, helping to chart the earliest course of inquiry in many-body physics. In nuclear physics, he helped to elucidate the collective motion in nuclei, and in particular of pairing in nuclei (with Aage Bohr and Ben Mottelson), and in theoretical astrophysics, he provided early input on the structure and development of neutron stars.

Pines spent the bulk of his academic career at Illinois Physics. His first stint from 1952 to 1955 was as Bardeen’s first postdoc, with the academic title research assistant professor. He returned in 1959, joining the U of I faculty as a professor of physics and electrical engineering.

Fradkin notes, “This symposium is a fitting way to celebrate David Pines and his legacy, while celebrating the excitement over what’s yet to come in our field. Our speakers are leading experimentalists and theorists, many of whom had a special connection to David Pines. Among our younger speakers are scientists whose work continues what Pines and his cohort started. When we say that our faculty today stands on the shoulders of giants, we are talking about the likes of David Pines and his cohort—Tony Leggett, Chris Pethick, Gordon Baym, and many others. These giants in the history of condensed matter theory and experiment really laid the groundwork for the promising work being done in superconductivity today, not just here, but around the world.”

In addition to his scientific research contributions, Pines was also well known for the instrumental role he played in bringing prominent scientists together to explore the big scientific questions of his time. He was the founding director of the Center for Advanced Study from 1967 to 1970 at Illinois. He served as vice president of the Aspen Center for Physics from 1968 to 1972. He was one of the key organizers and founding members of the Santa Fe Institute (SFI) in 1984; he later played a variety of organizational roles for the institute, most recently holding the title of co-founder in residence. And in 1999, he co-founded the Institute for Complex Adaptive Matter, a virtual campus collective of scientists, and served as its first director and on its board of trustees and science steering committee; in 2004, he cofounded its international component I2CAM.

Pines was a dedicated teacher and his work as an author and editor likewise facilitated scientific advances in several branches of physics. In addition to producing hundreds of peer-reviewed scientific articles, Pines was the founding editor (1961–1981) of Frontiers in Physics, a lecture-note and reprint series. He served as editor of the American Physical Society’s Reviews of Modern Physics (1973–1996), reinvigorating the publication and making it one of today’s leading physics journals. And he served many years on the editorial boards of the Journal of Physics and Chemistry of Solids and of the SFI’s Studies in the Sciences of Complexity.

Generations of condensed matter theorists were educated by Pines’ physics textbooks, which have been widely used in the US and abroad. Because of his focus on communicating complex science through basic concepts, these volumes are still relevant to the teaching of physics today: The Many-Body Problem (1961; in Russian, 1963); Elementary Excitations in Solids, (1963; in Russian 1965; in Japanese, 1974); and the two-volume treatise (with Philippe Nozières) Theory of Quantum Liquids (1967; in Russian, 1968). With economics Nobel laureate Kenneth Arrow and Philip W. Anderson, Pines edited the volume The Economy as a Complex Evolving System, summarizing a series of SFI workshops on complexity economics.