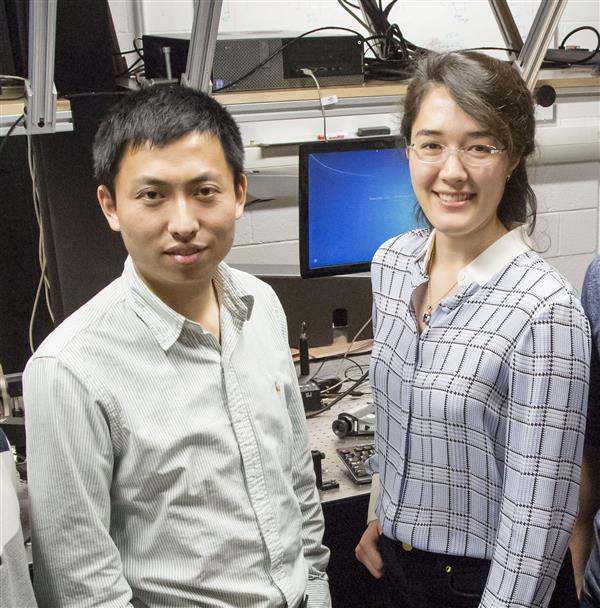 Researchers on this project are graduate student Bin Fang and principal investigator Virginia Lorenz, associate professor of physics. Photo by L. Brian Stauffer, University of Illinois at Urbana-Champaign
Researchers at the University of Illinois at Urbana-Champaign have constructed a quantum-mechanical state in which the colors of three photons are entangled with each other. The state is a special combination, called a W state, that retains some entanglement even if one of the three photons is lost, which makes it useful for quantum communication. Such entangled states also enable novel quantum applications and tests of fundamental physics.
The uniqueness of this work is that the researchers used color, or the energy of the photons, as the entangling degree of freedom, while previous work used polarization. The energy of a photon cannot be easily changed, which reduces the possibility of errors when the energy-entangled W state is propagating over a long distance. The state was verified for the first time by measuring information about the two-photon sub-systems. Their findings are published in Physical Review Letters.
“People have created polarization-entangled W states before,” noted Bin Fang, the graduate student on the project. “However, this is the first discrete energy-entangled W state and the first three-photon entangled state created in optical fiber.”
To create the state, the researchers shine a laser into a glass fiber. Through a process called spontaneous four-wave mixing, four laser photons interact with the fiber and are annihilated to create two pairs of photons at different colors (for example, two pairs of red and green photons). These four photons are used to construct the 3-photon W state. One of them is detected to be green, leaving the other three entangled as a W state, which is comprised of all possible iterations of two red photons and a green photon at once. 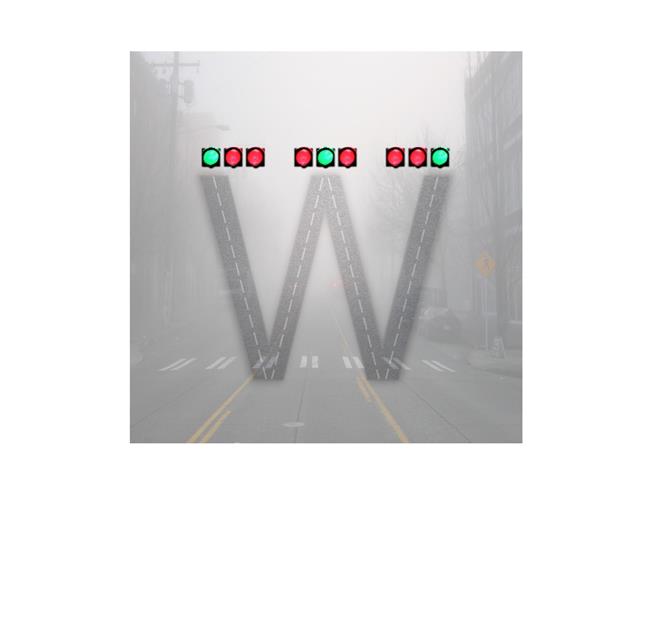 What makes this research unique is the use of color, or the energy of photons, to create an energy-entangled W state. Image courtesy of Gina Lorenz and Bin Fang, University of Illinois at Urbana-Champaign
The illustration that the researchers use is that of traffic lights.
“Like three traffic lights that always signal two stops and a go, the photons’ colors always end up being two reds and a green, but the specific combination is not set until we make a measurement – a feature of the quantum mechanical nature of photons,” said Virginia Lorenz, associate professor of physics and the principal investigator.
Compared to other types of three-particle entanglement, the W state is useful for quantum communication in that, if one of the photons is lost, the other two retain some entanglement, meaning the communication is able to continue.
"Another new aspect of this research is that we found a path to verify the state is the one we aimed for that circumvents a complicated color conversion step, " said Lorenz. "Our theorist collaborators came up with a way to fairly straightforwardly show that the W state exists.”
This work was supported in part by the National Science Foundation. The conclusions presented are those of the researchers and not necessarily those of the funding agencies.
If you have questions about the Department of Physics or ideas for other stories, contact Siv Schwink, 217.300.2201