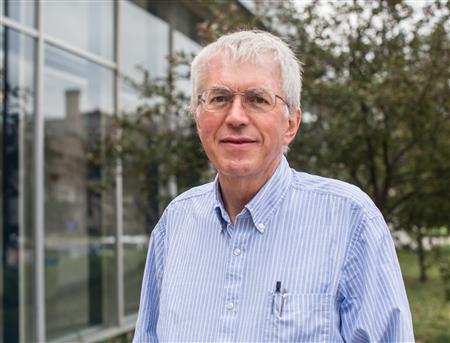 Eckstein shares the prize with two colleagues—Brookhaven National Laboratory Senior Scientist Ivan Božovic and Cornell University Industrial Chemistry Professor Darrell G. Schlom—with whom he worked at Varian, Inc., in Palo Alto, CA, in the 1990s. There they developed atomic-layer-by-layer molecular beam epitaxy (MBE) as an effective method of growing artificially structured oxide materials in which each atomic-oxide layer can be individually specified. 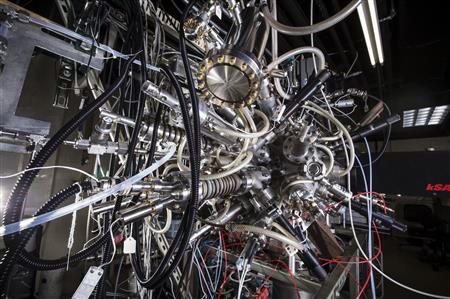 Close-up image of the atomic-layer-by-layer molecular beam epitaxy (MBE) apparatus in the Eckstein Lab in the Frederick Seitz Materials Research Laboratory on the Urbana campus. Photo by L. Brian Stauffer, University of Illinois at Urbana-Champaign
Eckstein is an experimental condensed matter physicist who studies electron transport in precision-engineered materials he constructs one atomic layer at a time. Over the course of his career, he has combined MBE with other innovative techniques to achieve many firsts in the engineering of precision thin films having few unintentional impurities or imperfections in their structure. This in turn has enabled his group to perform leading-edge research shedding new light on emergent phenomena in superconducting and magnetic materials. His research is currently focused on materials for quantum devices including work to create topological superconductivity and Josephson junction based qubits.

Several of Eckstein’s colleagues at Illinois, Stanford, and Berkeley have also benefited from Eckstein’s approach to growing research samples. This includes his close collaborator Illinois Materials Science and Engineering Professor Jian-Min Zuo, who has worked with Eckstein on structural and electronic studies of many widely different artificially structured materials.

Illinois Physics Professor Peter Abbamonte notes, “Jim led the team at Varian that invented the field of oxide MBE. Before Jim, people thought MBE was just a method for growing semiconductors. His work completely redefined what was possible using epitaxial techniques, and inspired the entire field to become more adventuresome about the classes of materials that could be grown. Jim was one of the reasons I chose to work here in Urbana and it is privilege to be his colleague."

Illinois Physics Professor Alexey Bezryadin adds: “Jim Eckstein keeps impressing us with new advances and discoveries. A recent example is his work on intrinsic topological insulator films, which are of great significance for the topologically protected quantum computation. Topological insulators are supposed to be conducting at their surface but insulating in the bulk. Usually, due to imperfections, even the bulk is conducting, which is a huge problem. Jim and his team developed a new compound which matches the ideal case and exhibits a dielectric behavior in the bulk, while the surface remains a good electrical conductor.”

At Illinois, Eckstein is a member of the Illinois Quantum Information Science and Technology Center (IQUIST) and of the Materials Research Laboratory (MRL).

Eckstein is a fellow of the American Physical Society and the holder of six US patents. He is a 2012 recipient of the Bernd T. Matthias Prize, sponsored by the Texas Center for Superconductivity at the University of Houston. In 2011, he received the Arnold O. Beckman Research Award of the U. of I. Research Board.

Eckstein received his bachelor's degree in physics from St. Olaf College in Minnesota in 1973 and his doctoral degree in physics from Stanford University in 1978. He completed a postdoctoral appointment at Stanford, prior to working as a research scientist at Varian Associates for 15 years. He joined the Department of Physics at Illinois as a professor in 1997.