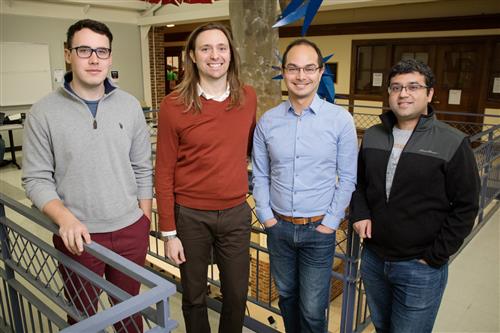 The researchers report their findings in the journal Nature.

The team’s work with QTIs was born out of the decade-old understanding of the properties of a class of materials called topological insulators. “TIs are electrical insulators on the inside and conductors along their boundaries, and may hold great potential for helping build low-power, robust computers and devices, all defined at the atomic scale,” said mechanical science and engineering professor and senior investigator Gaurav Bahl.

The uncommon properties of TIs make them a special form of electronic matter. “Collections of electrons can form their own phases within materials. These can be familiar solid, liquid and gas phases like water, but they can also sometimes form more unusual phases like a TI,” said co-author and physics professor Taylor Hughes.

TIs typically exist in crystalline materials and other studies confirm TI phases present in naturally occurring crystals, but there are still many theoretical predictions that need to be confirmed, Hughes said. 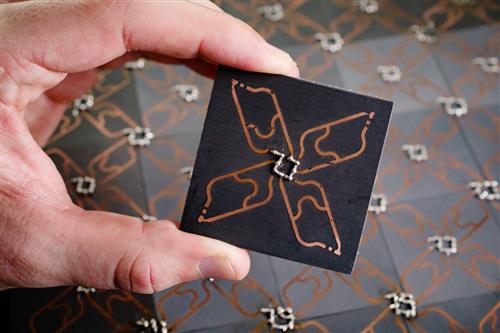 A single circuit board, foreground, that when joined with others forms the experimental array of the quadrupole topological insulator. Photo by L. Brian Stauffer
One such prediction was the existence of a new type of TI having an electrical property known as a quadrupole moment. “Electrons are single particles that carry charge in a material,” said physics graduate student Wladimir Benalcazar. “We found that electrons in crystals can collectively arrange to give rise not only to charge dipole units – that is, pairings of positive and negative charges – but also high-order multipoles in which four or eight charges are brought together into a unit. The simplest member of these higher-order classes are quadrupoles in which two positive and two negative charges are coupled.”
It is not currently feasible to engineer a material atom by atom, let alone control the quadrupolar behavior of electrons. Instead, the team built a workable-scale analogue of a QTI using a material created from printed circuit boards. Each circuit board holds a square of four identical resonators – devices that absorb electromagnetic radiation at a specific frequency. The boards are arranged in a grid pattern to create the full crystal analogue.

“Each resonator behaves as an atom, and the connections between them behave as bonds between atoms,” said Kitt Peterson, the lead author and an electrical engineering graduate student. “We apply microwave radiation to the system and measure how much is absorbed by each resonator, which tells us about how electrons would behave in an analogous crystal. The more microwave radiation is absorbed by a resonator, the more likely it is to find an electron on the corresponding atom.”

The detail that makes this a QTI and not a TI is a result of the specifics of the connections between resonators, the researchers said.

“The edges of a QTI are not conductive like you would see in a typical TI,” Bahl said, “Instead only the corners are active, that is, the edges of the edges, and are analogous to the four localized point charges that would form what is known as a quadrupole moment.  Exactly as Taylor and Wladimir predicted.”

“We measured how much microwave radiation each resonator within our QTI absorbed, confirming the resonant states in a precise frequency range and located precisely in the corners,” Peterson said. “This pointed to the existence of predicted protected states that would be filled by electrons to form four corner charges.”

Those corner charges of this new phase of electronic matter may be capable of storing data for communications and computing. “That may not seem realistic using our ‘human scale’ model,” Hughes said. “However, when we think of QTIs on the atomic scale, tremendous possibilities become apparent for devices that perform computation and information processing, possibly even at scales below that we can achieve today.”

The researchers said the agreement between experiment and prediction offered promise that scientists are beginning to understand the physics of QTIs well enough for practical use.

“As theoretical physicists, Wladimir and I could predict the existence of this new form of matter, but no material has been found to have these properties so far,” Hughes said. “Collaborating with engineers helped turn our prediction into reality.”

The National Science Foundation and U.S. Office of Naval Research supported this study. The conclusions presented are those of the researchers and not necessarily those of the funding agencies.

El-Khadra quoted in Symmetry magazine: 'The many paths of muon math'

The goal of the experiment, Fermilab Muon g-2, is to better understand the properties of muons, which are essentially heavier versions of electrons, and use them to probe the limitations of the Standard Model of particle physics. Specifically, physicists want to know about the muons’ “magnetic moment”—that is, how much do they rotate on their axes in a powerful magnetic field— as they race around the magnet?

Physical Review B is celebrating its 50th anniversary in 2020. The journal emerged out of its revered parent, The Physical Review, in response to the explosive growth of specialized physics content. It has excelled in front-edge coverage of condensed matter and materials physics research. As part of the celebration, in 2020 the editors are presenting a Milestone collection of papers that have made lasting contributions to condensed matter physics. Selection of papers of such importance is not an easy task. It is inevitable that some very important work will not be featured because of the abundance of gems in the treasure trove of the largest journal for physics. The Milestones will be highlighted on the journal website and in social media throughout the year.

The University of Illinois Writing Across Engineering & Science (WAES) program has been awarded $599,999 by the National Science Foundation (NSF) for the research project Advancing Adaptation of Writing Pedagogies for Undergraduate STEM Education Through Transdisciplinary Action Research. This research program, which ultimately aims to incorporate effective technical writing as a core skill taught in STEM courses across the university, is funded through NSF’s Improving Undergraduate STEM Education Program: Education and Human Resources.