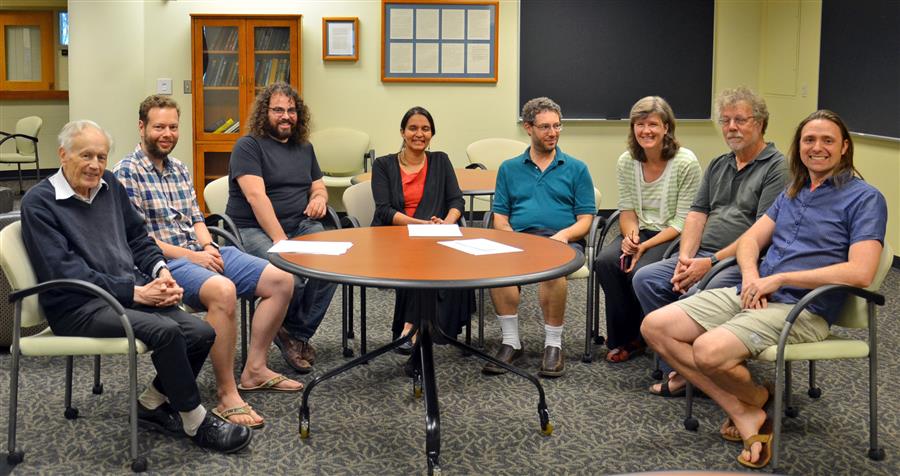 (L-R) Illinois Physics Professors Anthony Leggett, Lucas Wagner, Barry Bradlyn, Smitha Vishveshwara, Bryan Clark, Karin Dahmen, David Ceperley, and Taylor Hughes pause for a photo in the common room of the Institute for Condensed Matter Theory (ICMT) in Urbana. The Moore Foundation grant will support critical research projects involving all ICMT members. Photo by Siv Schwink for Illinois Physics
The Institute for Condensed Matter Theory in the Department of Physics at the University of Illinois at Urbana-Champaign has recently received a five-year grant of over $1 million from the Gordon and Betty Moore Foundation. The grant is part of the Gordon and Betty Moore Foundation’s Emergent Phenomena in Quantum Systems (EPiQS) Initiative, which strives to catalyze major discoveries in the field of quantum materials—solids and engineered structures characterized by novel quantum phases of matter and exotic cooperative behaviors of electrons. This is the second 5-year EPiQS grant awarded to the ICMT by the Moore Foundation. The two awards establish an EPiQS Theory Center at the Institute for Condensed Matter Theory.

Physics Professors Taylor Hughes and Smitha Vishveshwara are the PI and co-PI, respectively, on the grant. The two PIs have worked with ICMT Director and Professor Eduardo Fradkin to established three key research fields that are priorities for its quantum-materials theory group: topological phases, strongly correlated matter, and computational tool development with an emphasis on quantum states of matter and non-equilibrium phenomena.

Hughes remarks, “We are in a unique position at Illinois to take on the most pressing open questions in strongly correlated materials and topology, given our combined strengths in computational, theoretical, and experimental approaches to quantum materials. With this support from the Gordon and Betty Moore Foundation, the scope of what we will be able to tackle is right in line with our top priorities for the ICMT’s research program.”

The funds will support three postdoctoral positions for three years each over a five-year period. All current ICMT faculty working on theoretical problems relating to quantum materials are named on the award.

Vishveshwara notes that, in keeping with the “Urbana-style of physics,” the Moore Postdoctoral Scholars will have the freedom to choose their respective research topics and which scientists they want to work with.

“The postdocs who are supported by this grant will have the opportunity to work with any faculty they choose, including experimental faculty” comments Vishveshwara. “Faculty at the ICMT have a long and productive history of collaborations with leading condensed matter experimentalists at Illinois Physics. The intellectual freedom the postdocs have in this crucial phase of their development as scientists fosters a deeper enquiry and also contributes tremendously towards advancing our ICMT research program.” 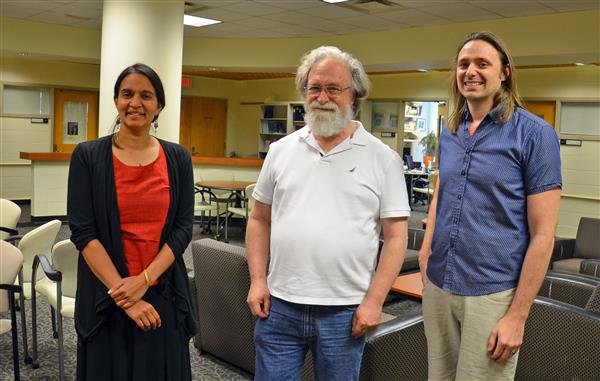 (L-R) Illinois Physics Professors Smitha Vishveshwara, Eduardo Fradkin, and Taylor Hughes pose in the common room of the Institute for Condensed Matter Theory (ICMT) in Urbana. Vishveshwara and Hughes are co-PI and PI respectively on the Moore Foundation grant; Fradkin is the the director of the ICMT. Photo by Siv Schwink for Illinois Physics
The Gordon and Betty Moore Foundation’s EPiQS Initiative established a total of eight theory centers in the current round of awards, up from six in its first round. Applications for EPiQS grants were considered by invitation only.

The ICMT was established in 2008 by a grant from the University of Illinois to encourage interdisciplinary collaboration on the most pressing questions in condensed matter physics. ICMT faculty members come from several units on the Urbana campus, most notably the Departments of Physics, Electrical and Computer Engineering, Materials Science, Mechanical Engineering, and Mathematics.

The EPiQS Initiative includes numerous opportunities for community building, including through scientist exchange programs among its theory centers.

Fradkin notes, “This continued funding from the Gordon and Betty Moore Foundation is really vital to the continued success of our research programs at the ICMT and it recognizes our success in training early-career theorists. Our former Moore Postdoctoral Scholars have gone on to appointments at leading institutions around the world and continue to make important contributions to our field.”