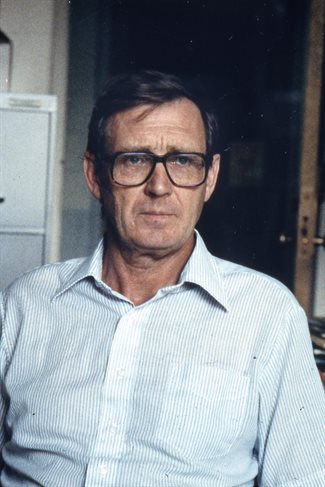 Hans Frauenfelder, a physicist whose landmark contributions spanned from elementary particles to biomolecules, died at his home in Tesuque, New Mexico on July 10, a few weeks short of his 100th birthday.  Having come to the Urbana Physics Department as a postdoctoral fellow in the 1950’s, Frauenfelder remained as a faculty member, becoming eventually one of its most distinguished professors and a permanent member of the Center for Advanced Study, UIUC’s highest recognition of scholarly work. After officially retiring from UIUC in 1992, at age 70, Frauenfelder took up a position as a staff member at the Los Alamos National Laboratory. In 1997, he became the director of the laboratory’s Center for Nonlinear Studies, which he led into complexity science. In 2004, he moved to the Theoretical Biology and Biophysics Group at LANL, where he continued to work, publishing his last paper in 2017.

Like Einstein, Frauenfelder was trained at the Eidgenössische Technische Hochschule in Zurich, Switzerland. Nominally under the supervision of Paul Scherer, a student of Peter Debye, Frauenfelder pursued several fundamental problems merging nuclear and solid-state physics. By studying the capture of K shell electrons in radioactive thin films, he was able to show that after an electron was absorbed and a neutrino was emitted (but not directly detected) the emitting nucleus recoiled, thereby establishing the reality of the neutrino in a new way. In his Ph.D. thesis, while being unable to establish the neutrino rest mass, the same technique proved capable of giving fundamental information on how atoms moved on solid surfaces. At the ETH, Frauenfelder also studied the correlation between successive decays of radioactive nuclei. This correlation is perturbed by the nucleus’s condensed phase environment and Frauenfelder showed how to use the so-called Perturbed Angular Correlation to study condensed phase dynamics.

In Urbana, using such correlations, Frauenfelder’s group became one of several experimental groups who were able to confirm within a very short time, Yang and Lee’s idea of parity violation in the weak interaction, which later won them the Nobel Prize. Symmetry remained one of Frauenfelder’s life-long passions, later probing for parity violation in the strong interactions in nuclei. For a time, Frauenfelder’s experiments also held the record for establishing limits on the lifetime of the proton, which some modern theories suggest should be able to decay, but so far appears to be completely stable.

Frauenfelder became among the first to appreciate the importance of the Mössbauer effect and championed Mössbauer, who later won a Nobel Prize. The Mössbauer effect led Frauenfelder into the world of biochemistry. Collaborating with Irwin Gunsalus, a member of the UIUC Biochemistry Department, he showed how the Mössbauer effect could be used to characterize the dynamics of heme proteins. He very quickly appreciated that the limitation of existing biochemical experiments to temperatures near room temperature meant that very fundamental mechanistic questions about how proteins work could not be addressed. He studied a seemingly very simple biochemical reaction, the binding of a molecular ligand (carbon monoxide) to myoglobin. At room temperature, this recombination event seemed very simple, but surprises awaited when Frauenfelder explored the reaction at cryogenic temperatures. At the lowest temperatures, the reaction still occurred with no apparent thermal activation energy. This was the clearest proof that a chemical reaction could occur exclusively by quantum mechanical tunneling. More surprising, at higher temperatures, the reaction required thermal activation, as expected, but the kinetics of recombination manifested a wide distribution of activation energies. This was the beginning of the energy landscape concept: a protein molecule does not have a unique structure but ranges over many such structures with widely differing energies and the dynamics of moving between different structures determines the protein function. Later, with Petsko and Tsernoglou, he explored protein x-ray crystallography at a range of low temperatures and showed the dynamics at room temperature was frozen in, proving the existence of a landscape. These results, along with the emergence of molecular dynamics computer simulations, after considerable debate in the biology community, revolutionized how we look at biomolecules, seeing them now as complex systems.

In taking up the problems of biology, Frauenfelder insisted that his goal was to find new physics, not just bring technical tools to biology. This insistence, along with his leadership, inspired many young physicists to take up this quest and has led to the emergence of a new field of “biological physics” as a branch of the sciences of complexity.

Frauenfelder is also remembered as an inspiring teacher, both in lectures and in his mentoring of graduate students, postdocs, and younger faculty, who have also become leaders in Physics. With Ernest Henley, a theorist, he wrote the textbook, “Subatomic Physics”, which through several editions, has become a mainstay of advanced undergraduate instruction across the country.

Frauenfelder is survived by his wife of 72 years, Verena, along with his son Ulrich, a now-retired professor of Psychology, and his daughters, Katterli, who is a movie Producer in Los Angeles and Anne, who is a teacher in Portland, Oregon. He also had four grandchildren and two great-grandchildren.