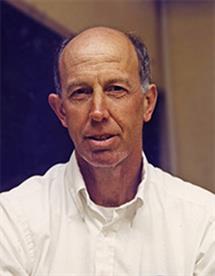 Professor Emeritus of Physics Ulrich “Uli” Ernst Kruse, 84, died on November 12, 2013, after a five-year struggle with Parkinson’s disease. Kruse was born in 1929 in Berlin, Germany. His family immigrated to Boston, MA before his tenth birthday. He is survived by his wife, Mary Ullmann Kruse, by his children Sarah, Thomas, and Julie, and by four grandchildren.

Kruse was a highly regarded experimentalist in high-energy physics who combined a gift for careful and rigorous analysis with excellent data-reduction skills. He enjoyed a productive research career and was a dedicated and innovative teacher.

Professor Emeritus of Physics and former head of department Ralph Simmons valued Kruse as a colleague and friend. He remembers many conversations that conveyed Kruse’s great love for music and informed and strong sense of justice in civil society.

“Kruse was exceedingly clear, responsive, and cheerfully exacting as a teacher,” shares Simmons. “His knowledge of the fundamentals of physics was admirably broad and secure. As a research scientist he was a valued and tenacious collaborator in the critical analysis of complex data.”

Kruse spent a sabbatical year at CERN in Geneva, Switzerland, in 1967, working on bubble chamber experiments. In a hand-penned note to then-head Gerald Almy, Kruse wrote about his family’s enjoyable experiences abroad (the oldest of the three children was then six years old) and about the excellent interaction between experiment and theory at CERN:

“[Director General Leon] Van Hove has done much to push this and he has succeeded well in finding among the theoreticians people who both are doing excellent new work far ahead of experiment as well as those more ‘useful’ to people like me who are willing to translate the latest into terms which start good new experiments.”

Kruse returned to CERN with colleagues Giulio Ascoli and Robert Sard for eight months in 1972 to test theoretically proposed models of particle structure through the study of the production and decay of meson resonances. This work substantially contributed to our ultimate understanding of strong interactions.

While on sabbatical at the Max Planck Institute for Physics in Munich, Germany (1974–75 and 1980–82), Kruse worked in the high-energy group participating in experiments at DESY in Hamburg, Germany. In 1974, DESY was Europe’s largest electron accelerator facility and one of two such facilities in the world strong enough to produce the newly discovered charm quark and its antiparticle.

At Illinois, Kruse demonstrated a great passion for teaching and was esteemed by faculty and students alike; he was known for his enthusiasm, dry wit, animated style, and engaging demonstrations. He inspired generations of physics students, frequently meeting with them outside of his regular office hours to hold special discussion or problem sessions. His courses never failed to receive the highest rankings from students.

Kruse’s former student, Physics Illinois alumnus Bancherd DeLong (BS 1975; MS 1977; PhD,1981) remembers, “Professor Ulrich Kruse was a good man and a great teacher. He was one of the rare individuals who could convey difficult theoretical concepts in such a manner that was easy to visualize and understand. In my undergraduate classical mechanics class, he gave me the ‘Aha moment’ and made me realize that physics was in my future. Thank you Professor Kruse, you will be missed.”

Starting in 1985, Kruse introduced the use of microcomputers as a pedagogical tool in large introductory physics courses at Illinois. With funding from both the IBM Corporation’s EXCEL program and the Apple Seedling program, students had access to department computers and participated in innovative interactive lab demos that Kruse designed. The in-class demos, revolutionary at that time, involved rapid data acquisition, displayed measurements in real time with graphical comparisons, and covered a wide range of topics, including classical mechanics, thermodynamics, electricity, light, special relativity, general relativity, and quantum mechanics.

Around the same time, Kruse was instrumental in developing a comprehensive TA training program for the department’s large elementary program that introduced an interactive pedagogical approach.

Kruse gladly shared his expertise on the use of computers in physics instruction and gave several talks on the subject. In 1988, he was invited to participate in NSF’s Disciplinary Workshops on Undergraduate Education, tasked with addressing critical issues related to curriculum development, student recruitment and retention in US undergraduate education in the sciences, mathematics and engineering.

Professor Steven Errede remembers Kruse’s contributions: “Uli Kruse was an amazing, technically-competent experimental high-energy physicist—I was extremely impressed with him and much enjoyed collaborating with him on the CDF experiment at Fermilab. Later on, after Uli had retired, I also spent much time continuing to interact with him, when I got involved with upgrading upper-level undergraduate physics labs in the 1990s. His guidance and sage advice on many of the critical details associated with various experiments in the undergraduate physics labs was incredibly helpful to me, and I very much appreciated all of his help and the depth of his knowledge and expertise. I miss all of those interactions with him, today!”

An avid nature lover who enjoyed climbing, hiking, skiing, kayaking, and canoeing, Kruse was also a great proponent of developing a campus-wide solid waste recycling effort. After running a pilot recycling program in the physics department, he wrote a letter to all department heads asking for support of a proposal that urged campus administration to establish a cost-effective recycling program to meet what Kruse believed was the University’s moral obligation—to be exemplary stewards of the natural environment.

After his retirement, Kruse pursued his interest in geology, informally joining the research group of Illinois Geology Professor Wang-Ping Chen and participating actively in weekly discussions of earthquakes and how the study of earthquake waves can provide important clues about the nature of the earth’s interior.

In 1954, Kruse was hired as an assistant professor of physics at the University of Chicago, where he participated in experiments on polarized protons, as well as in experimental studies of dispersion relations in pion scattering and later in pion-proton scattering. He also participated in the first successful extraction of a proton beam from the UC’s synchrocyclotron.