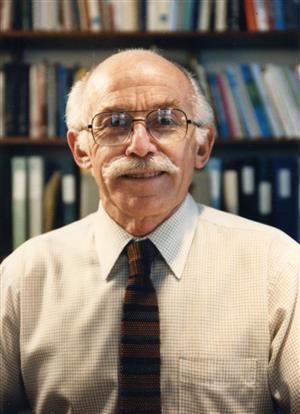 Professor and Dean Emeritus Daniel J. Alpert was recognized as both a great innovator and educator. In his early career, he contributed to the development of airborne radar and worked on the Manhattan Project at the University of California, Berkeley. He held several positions at Westinghouse prior to joining the faculty at Physics Illinois in 1957. He was a pioneer in the field of very low-pressure physics. He also became a key figure in the development of ultrahigh vacuum technology, which has made possible several significant advances in surface physics, physical electronics, catalysis, atomic collision processes, and upper atmosphere science. He was selected for a Guggenheim Fellowship in 1965.

He initiated the development of the PLATO system for computer-based education at Illinois. He also played an active part in the development of cross-disciplinary education and research programs at Illinois. In 1958, he transformed the Military Research Based Laboratory into the Coordinated Science Laboratory for conducting unclassified fundamental research and served as its director from 1959 to 1965. In 1965, he was appointed dean of the Graduate College. In 1972 he became the director of the Center for Advanced Studies.

After his retirement in 1987, Daniel Alpert served as director of the Science, Technology & Society program and as a member of the board of advisers for the Math Science Technology and Education program, both at Illinois.