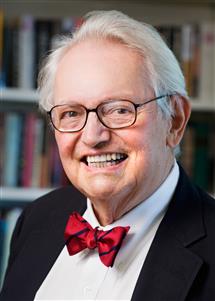 Charles P. Slichter, University of Illinois professor emeritus of physics and of chemistry, died on Monday, February 19, 2018, in Boulder, Colorado. He was 94.

Slichter was a pioneer in the development and application of nuclear magnetic resonance (NMR) spectroscopy to elucidate the structure and behavior of matter at the atomic scale, and a renowned expert on superconductivity. Slichter’s seminal contributions to the fields of condensed matter physics and chemistry have been recognized with numerous awards, including the 2007 National Medal of Science.

Slichter is revered at the University of Illinois, where he served on the faculty for 57 years, for his fostering of the “Urbana style”—a way of tackling longstanding scientific problems by a combination of theory and experiment that emphasizes close interdisciplinary collaboration and mutual respect. Known by everyone for his brilliant smiles, infectious enthusiasm, and trademark bow ties, Slichter exemplified science at its finest—creative, rigorous, curious, and scrupulously honest. His inspired teaching trained generations of American physicists and chemists and, through them, enabled a host of modern technologies.

NMR studies atomic nuclei by probing them with radio waves and measuring their response. The nuclei respond only when the radio waves are tuned to specific resonance frequencies, which depend on both the properties of the nuclei and their local magnetic field. The measured spectrum of resonance frequencies, as well as the time dynamics of the resonance response, gives information about the local environment of the nuclei. Magnetic resonance imaging (MRI), widely used in medicine, is an extension of NMR that enables 2D and 3D images to be reconstructed from NMR spectra.

Slichter pioneered many fundamental techniques in NMR. He was a co-discoverer (with H.S. Gutowsky and D.W. McCall) of indirect spin-spin coupling, known as J-coupling, in molecules. This phenomenon enables structural information about molecules to be deduced from their NMR spectrum, and is a key analytical tool in modern chemistry. With T.R. Carver, Slichter performed the first dynamic polarization of nuclei using electron spins. Dynamic nuclear polarization can be used to increase the sensitivity of NMR dramatically, enabling the study of more complex molecules and smaller samples. Extensions of the technique are used to determine aspects of molecular structure, or to provide a method of operation for the three-level maser, a microwave-frequency precursor to the laser.

Slichter and his student L.C. Hebel performed the first NMR studies on superconductors, materials in which electric current can flow without resistance. This was a major feat in itself, because superconductors exclude the magnetic fields and radio waves used to perform NMR spectroscopy. The results of their experiments are recognized as the first proof of the electron-pairing concept central to the Bardeen-Cooper-Schrieffer (BCS) theory of superconductivity, which was developed concurrently, also at the University of Illinois, and was honored with the 1972 Nobel Prize in Physics. Slichter conceived of the experiment while listening to a presentation from Bardeen, and the analysis was carried out with substantial collaboration from the BCS authors, even while they raced to prepare their own theoretical work. This strong collaborative interaction between theory and experiment typified the “Urbana style” of research, and Slichter played an important role in setting this tone for colleagues. Another research “first” of Slichter’s, the measurement of the Pauli spin susceptibility, came after a chance hallway meeting with colleague David Pines, who had just derived a more precise theoretical model for the effect, but lamented to Slichter that “no one can measure it.” Slichter, who had worked on some related problems as a graduate student, replied “David, I know how to measure it”, and the experimental results were published shortly thereafter.

Other notable research achievements include discoveries on the behavior of high-temperature superconductors, fundamental studies of metal surfaces for catalysis, the introduction of phase sensitive detection to pulsed NMR, the theory of chemical exchange and its effects on NMR spectra, studies of charge density waves and the Kondo effect, and the theory of chemical shifts in fluorine.

At the University of Illinois, Slichter directed the research of 63 doctoral students and more than 15 postdoctoral researchers, including Nobel laureate Sir Peter Mansfield, co-inventor with Paul Lauterbur of MRI. Slichter’s textbook, Principles of Magnetic Resonance, now in its third edition, has trained students around the world for nearly 60 years. Slichter said in 2004, “I really love doing physics; the personal connection is the way I love to do it. If I were not in a university setting, I would have to find students to work with.”

In academia, Slichter served for 25 years (1970–1995) as a Fellow of the seven-member Harvard Corporation, Harvard University’s highest governing body, including 10 years as Senior Fellow. He chaired the selection committee that chose Neil Rudenstine as the president of Harvard in 1991. Slichter was the president of the International Society of Magnetic Resonance from 1986 to 1989. His service to US industry included membership on the board of directors of Polaroid (1975-1995) and on science advisory committees to IBM (1978-1993) and United Technologies (1972-1982).

Among his many honors and awards are the National Medal of Science (2007), the Comstock Prize (shared with E.L. Hahn) of the National Academy of Sciences (1993), the Irving Langmuir Prize in Chemical Physics (1969) and the Oliver E. Buckley Prize in Condensed Matter Physics (1996) from the American Physical Society, the Citation for Chemical Breakthrough Award (shared with H.S. Gutowsky and D.W. McCall) from the American Chemical Society (2016), and the Triennial Prize of the International Society of Magnetic Resonance (1986). He received honorary doctor of science degrees from the University of Waterloo (1993) and the University of Leipzig (2010) and an honorary doctor of laws degree from Harvard University (1996). He was elected a member of the National Academy of Sciences in 1967, the American Academy of Arts and Sciences in 1969, and the American Philosophical Society in 1971.

Sir Anthony J. Leggett, Nobel laureate and the John D. and Catherine T. MacArthur Professor and Center for Advanced Study Professor of Physics at the University of Illinois, described Slichter as “a towering figure in condensed matter physics, on both the national and international stage. He was a warm and supportive figure in the Urbana physics department right up to his last years.”

University of Illinois emeritus professor Gordon Baym said, “Charlie was a remarkable colleague, one of the last of the great physicists of the postwar generation. He was always intellectually curious and remarkably wise. At the same time he was a great human being, amazingly encouraging and supportive of his colleagues, students, and friends, whether young or old. Just seeing his warm smile would brighten everyone's day.”

Head of the University of Illinois Department of Physics and professor Dale Van Harlingen said, “Charlie Slichter was a legend, a role model, and a friend to everyone who ever had the opportunity to meet him. His passion for good science, his contagious kindness, and his remarkable energy has inspired me throughout my career, and I think everyone else at the University of Illinois and beyond. In many ways, Charlie has best defined the Urbana style that characterizes the culture and spirit of the Department of Physics at Illinois through his stellar contributions in NMR that have significantly impacted our understanding of condensed matter physics, especially superconductivity, and the chemistry of materials, his excellence in teaching and mentoring of students, and his unparalleled warmth and friendliness. He is truly one the great scholars and gentlemen of our generation. Charlie has made a lasting impression on all of us—he will be missed but never forgotten.”

Slichter was born on January 21, 1924, in Ithaca, New York, to Sumner Huber Slichter, a labor economist who became the first Lamont University Professor at Harvard University, and Ada (née Pence) Slichter. Slichter was named after his paternal grandfather, Charles Sumner Slichter, a noted professor of applied mathematics and dean of the graduate school at the University of Wisconsin. His maternal grandfather, William David Pence, was a professor of railway engineering at the University of Wisconsin. From a young age, Slichter was interested in science and mathematics. It was his senior-year physics course at the Browne & Nichols School in Cambridge, Massachusetts that made it clear, without a doubt, that he wanted to be a physicist.

Slichter studied physics at Harvard University, receiving his A.B. (1946), M.A. (1947), and Ph.D. (1949) degrees there. During World War II, while an undergraduate at Harvard, he worked as a research assistant at the Underwater Explosives Research Laboratory at Woods Hole, Massachusetts, where he constructed oscilloscopes—experience that prepared him for his doctoral research with Edward Purcell, who led the group at Harvard that co-discovered nuclear magnetic resonance. Slichter was his third graduate student, beginning research with Purcell shortly after that discovery.

Slichter came to the University of Illinois in 1949 as an instructor, recruited by then-department head F. Wheeler Loomis as an integral part of an effort to build a world-class faculty in the emerging field of solid-state physics. Slichter was appointed assistant professor two years later and quickly rose through the ranks to full professor in 1955. At Illinois, he held additional professorial appointments at the Center for Advanced Study (1968–1997) and the Department of Chemistry (1986–1997). After his retirement in 1996, Slichter maintained an active research program at Illinois, holding an appointment as research professor of physics and continuing to advise graduate students (1997–2006).

A memorial service celebrating his life will be held on Saturday, April 7, 2018, beginning at 11 a.m., at the Krannert Center for the Performing Arts in Urbana, Illinois. 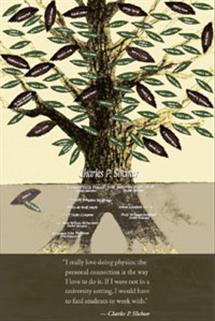 View a larger version of the Tree of Scholarship