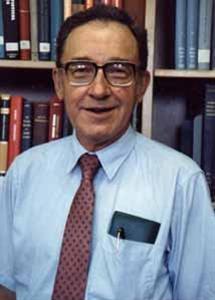 Frederick Calvin Brown, 87, of Everett, Washington, a pioneer in the study of the alkali and silver halides, died on November 18, 2011. He was a faculty member in the Department of Physics for 32 years.

Fred Brown was born July 6, 1924, to Rose and Fred Brown in Seattle, Washington. He graduated in 1942 from Roosevelt High School and received his SB (1945), MA (1947), and PhD (1950) from Harvard University. During World War II, while an undergraduate at Harvard, he worked for the US Navy on radar technology. After receiving his doctorate, he worked as a physicist at the Naval Research Laboratory in Washington, DC, and then at the Applied Physics Laboratory at the University of Washington in Seattle. He married Joan Adele Schauble in Seattle on August 9, 1952. She died in 2003.

Brown taught physics at Reed College in Portland, Oregon, from 1952 until 1955, when he joined the Department of Physics at the University of Illinois, where he remained until his retirement in 1987. He and his wife then moved to Whidbey Island, Washington. In 1993, Professor Brown was appointed Professor Emeritus of Physics at the University of Washington, where he maintained an office until his death.

Brown's early work on defects in silver halides led to many years as a consultant for the Eastman Kodak Company. Colleagues recalled the 1960s informal meetings of the "Friends of the Silver Halides" at the annual APS March meetings, in which Brown played a prominent role.

Brown was also a pioneer in the development of synchrotron radiation as a probe of defects in crystals, and he was the inventor of "the grasshopper"—an ultrahigh-vacuum compatible monochromator that opened up the previously inaccessible vacuum uv/soft x-ray spectral range.

An avid outdoorsman, Brown climbed all the mountains in the Pacific Northwest except Glacier Peak. He held a pilot's license for a number of years and was a member of the Aircraft Owners and Pilots Association.